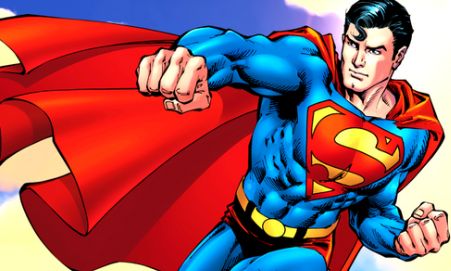 About midway through Man of Steel, Superman is faced with a dilemma. Either he saves humanity by giving himself up to General Zod, or he lets us all get blown apart in appropriate bombastic summer blockbuster form. Unsure of what to do, he decides to take his problems to a priest. Then, while seated under a traditional stained glass image of Jesus praying in a garden, he lays out his options to this man of the cloth. As he leaves, the Man from Krypton says that he’s not sure if humanity is worth saving, leaving a very surprised priest at the pulpit. I’d be surprised, too, since the last I checked Superman was a nice Jewish boy.

In the early 1930’s, two Jewish teens in New York, Jerry Siegel and Joe Shuster, created a hero they needed. Their outlook was bleak, as it was for just about everyone else—the Great Depression had brought America to its knees, and monsters were preying on our fears at home and abroad. From the ruins of World War I, Adolf Hitler seized the Chancellorship of Germany, thus legitimizing a new era of anti-Semitism from which it took decades to recover. To top it off, Siegel and Shuster couldn’t get laid.

So they created Superman, the answer to their pubescent prayers. He could do it all, literally, and his triumphs made sense of a world that was difficult and frightening to comprehend. And in just a few years, Action Comics would debut what would eventually become a perfected image of not just Judaism, not just American idealism, but of humanity itself. He stands for truth and justice, and while the American way has arguably faltered over the years, Superman hasn’t.

Critics have convincingly argued the parallels between the childhoods of Moses and Clark Kent, and it doesn’t take much to become convinced that Superman’s origins are decidedly Jewish. Kal-El— which can be translated from Hebrew as “Voice of God”—is DC Comic’s Baby in a Basket. Drawn from the reeds, or rather, the wheat stalks of Kansas, he is a stranger in a strange land who must learn to channel his extraordinary gifts. Raised among foreigners, he soon learns who he really is, where he really comes from, and must struggle to find his identity. Once Clark Kent becomes Superman, it is the beginning of a new era for humanity, a golden age.

Superman doesn’t ask you to accept him as your personal hero, and he doesn’t condemn those who don’t agree with his positions. He simply aids them when they are in need, because that is what should be done by those who are capable of doing so. He is a Jewish mensch—a doer of good deeds.

So why is Clark Kent striking so many crucifixion poses in Man of Steel?

The latest incarnation of Superman bombards you with various actions, images, and descriptions of Kal-El Christ for nearly two and a half hours. When you can actually hear your own thoughts over the brain-rattling bass thunder of computer-generated destruction, you’ll wonder at what point did this universal icon of human goodness, based in part on Jewish tradition, become so overtly, and exclusively, Christian.

In Man of Steel, Superman doubts the worth of humanity. Do we even merit saving? This film’s incarnation of Kal-El hesitates to protect us. The original incarnation, the Jewish incarnation, would never have entertained the notion. We are worth saving because deep down we are good, despite the choices we might make out of fear, desperation, or ignorance.

The fact that Superman is almost undoubtedly rooted in Judaic messianic lore does not draw away from the universality of what he supposedly stands for. The Jewish messiah arrives for humanity, not only those who accept him or her. And regardless of humanity’s actions, the messiah still serves as an example of the best people can be, and should be. Superman is no different.

With the DVD release of Man of Steel this week, this straight-line comparison is even more evident. You can pause Superman as he slowly backs out of a spaceship orbiting Earth, his arms outstretched, his feet almost crossing each other. Why is this now generally accepted Superman behavior?

There has been a recent trend of attempting to root modern superhero tales in darker, “realistic” settings. What Alan Moore popularized in his seminal work, Watchmen, soon spread to Batman, X-Men, Superman, and others. Their film adaptations eventually reflected this, to varying degrees of success. Despite some of its missteps, Christopher Nolan’s Dark Knight Trilogy convincingly sets Batman/Bruce Wayne against a backdrop of self-doubt and pessimism. It works because Batman is a deeply troubled, some would argue pathologically disturbed, character. It dominated the box office, and so other DC Comics characters unsurprisingly followed this trend, eventually leading us to Man of Steel.

But somehow, along this trajectory of making superheroes more “believable,” realistic became equated with doubt and darkness. Modernity now meant shedding the spandex and attending church. A contemporary, American Superman must possess misgivings, must be (at least initially) hesitant before he saves us. He must be, in essence, Christ-like, because that is what modernity must look like. It’s tough for a Jewish kid in America to accept.

Superman isn’t a Christ figure, he’s a Messianic figure, and there is a difference. But just because he isn’t necessarily Christ-like does not render him irrelevant. Hope does not have to disappear with modernity. Even in contemporary times, there are constants. Monsters can be defeated. The universality of empathy is always available to us, should we strive for it.

Superman will always save us.

Andrew Paul's work has been featured online in Burnt Bridge, Lent Magazine, and Oxford American. In 2012, his collection of short fiction, The River Thief, was a recipient of the Portz National Honors Award. He lives in a renovated Boys and Girls Club in Oxford, Miss. Follow him on Twitter @anandypaul.

Hey, Hollywood: Why No Biopics of Jewish Comic Book Creators?

‘Oskar and the Eight Blessings:’ The Ghosts of Chanukah Future