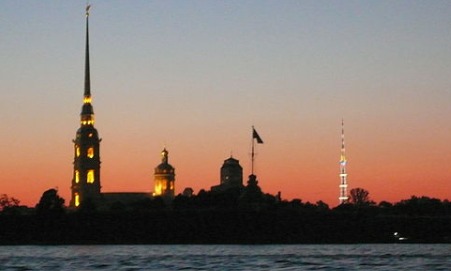 I love Russian. I love how the phrases resonate with innate lyricism; how the constants punctuate speech with that distinctly Slavic bite. I have a weakness for chanson, a fondness for Pushkin, and I know more about Russian rock than do my parents. But I especially love how speaking the language makes me feel – like an edgier, snarkier me, with a stockpile of one-liners and wit that rarely makes its way into my English-language conversations.

For these reasons and more, I’ve incurred countless raised eyebrows from fellow Russian-speakers when answering that obligatory question – where are you from?

Because I’m not from Moscow, St. Petersburg, Kiev, Baku, Tashkent, or some variation thereof—I grew up right here, between Brooklyn and Jersey.

I am the product of two Jewish refugees whose families fled the Iron Curtain at the first sign of opportunity. Long before the mass exodus of over a million Soviet Jews to Israel and the United States in the ‘90s, both nations harbored the first wave of refuseniks in the seventies after overwhelming international pressure on the USSR to loosen its emigration restrictions. My parents were of the 163,000 or so who fled to Israel and America in that first wave, before the doors were again shut throughout most of the ’80s.

It comes as no surprise, then, that most of the Russian Jews I encounter (and living in New York City, I encounter many) are of the latter exodus. Thus, in addition to the obligatory question, I’m often confronted with inquiries suggesting the uniqueness of my situation:

“How is your speaking so good?” (I learned from my family).
“Why do you live on Brighton Beach?” (My parents have an apartment there).
“What is your Russian name/What does your family call you?”

To the last question, I give my name with a foreign pronunciation: “Samanta,” said in what could be my own grandmother’s accent. Cognitive dissonance ensues.

When these exchanges take place, I feel like an anomaly — a rare sighting in the urban immigrant jungle. The immigrants who arrived in their teens (as my parents did two decades prior) are immensely curious. They interrogate me as if getting a sense of what their Americanized children might be like a generation from now.

Twenty-somethings who arrived as mere toddlers are surprised to find that my command of Russian is, in many cases, as strong as (if not better than) theirs. While some have shunned aspects of our heritage as a means of assimilation, I’ve not only embraced but gone so far as to incorporate immigrant traits into my self-image. Whereas my love for the language is obvious, my significant other (another American-born whose family arrived in the seventies) detests and refuses to speak it, though his comprehension is as good as my own.

But why? I was born in Manhattan and raised in a Jersey suburb with no semblance of an immigrant community. Why do I find myself consistently gravitating toward Russian expats?

The explanation, though not simple, is unique. It comes from a place of strong family values and even stronger contradictions. Somewhere in the process of coming of age and establishing an identity, the ideologies that were hammered into me as a child — among them, Zionism and American patriotism were mixed up with misplaced nostalgia for a reality I never experienced. The result is an avid, perhaps naive, not-quite-Russophilia, which (much to the chagrin of my parents) doesn’t seem to lessen with age.

The enthusiasm started young. At school show-and-tells, I would flaunt storybooks adorned with Cyrillic lettering. At student icebreakers, my bilinguality was always the defining characteristic I shared about myself, and eventually kids started accusing me of sporting a foreign accent. I relished having a unique background that set me apart from the rabble, but hated the exclusion that came with it. In truth, my pseudo-immigrant pride was really a defense mechanism used to cope with a general feeling of “otherness” that I could never quite shake.

The factors that contributed to this otherness were all lumped together into a confused amalgam of Eastern European identity, or at least some vaguely Eastern European identity that I picked up from family, Soviet cartoons, and many weekends spent at my grandmother’s home in Brighton Beach, the Russian immigrant community in Southern Brooklyn. I associated Russian things with Jewish things because my family’s goofy Yiddishisms were interspersed with Russian, and because all of the Russian-speakers that I knew were Jews. (The exception, of course, was my Ukrainian nanny, who I remember once crossed herself before me in silent prayer. This was the first time I’d witnessed this act in person, and it made me notably uncomfortable – as if I had intruded on an alien, intimate ritual that wasn’t meant for Jewish eyes).

I knew that I came from a family of passionate Zionists before I knew that a word for the concept existed. In later years, I tried to embrace my Jewish identity with a trip to Israel and a couple of disappointing Jewish summer camp experiences. I didn’t get along much with American Jews – their version of Jewish identity was different from mine and felt all but foreign. Russian faces, voices, and accents felt like home. Kosher food was a stranger. The Passover seder felt more authentic with vinegret and Olivye on the table (chased back with vodka, no less).

It became clear by the time I entered college that my parents’ hopes of raising an all-American daughter with zero ties to the Old Country had largely backfired. My Russophilia was as ardent as ever. One summer, after taking a semester’s worth of Russian language and literature courses, I asked my parents to allow me to study abroad in St. Petersburg (a city in a country that I, shockingly, have yet to visit).

Merely entertaining the thought, it seemed, was totally out of the question. My parents scorned me for my naivety, outraged that I romanticized the very culture they fled (and they wouldn’t be the first. I’ve met many immigrants with post-traumatic aversion to anything having to do with that place). “You have no idea what it’s like,” urged my mother. “A girl like you would be very unsafe there. Don’t be foolish.”

Of course, this only fueled my curiosity – but I found other means of satisfying it. A few summers later, I packed up my guitar and carpooled with some friends to a Russian music festival in the middle of the Catskill Mountains, where I met dozens of Russian artists and musicians, old and young alike. There, I became acquainted with group of free spirited young Russians that were different from the ones I had grown accustomed to, for primarily two reasons: one, they had just arrived in America; and two, they weren’t in the least bit Jewish.

I was fascinated. Their dress, their music, their slang — everything was so different from the Russian-speakers I was used to; the Brighton Beachniks who still clung so desperately to antiquated Soviet mentality. These youngsters were cosmopolitan and bursting with fresh energy. They weren’t yet jaded by the “immigrant experience,” nor were they hampered by big glaring questions of Jewish identity. They just wanted to have fun, and I wanted to right along with them.

So I did. I spent the rest of that summer attending every Russian festival and party I could get to, and as a result, my speaking improved tenfold. Mom and Dad were furious at me for getting mixed up in this crowd, and I was furious at their close-mindedness. But it didn’t matter. For a time, my new scene (and the adopted identity that came along with it) was a dream. These friends were creative, exotic, and spoke Russian so beautifully that even expletives fizzled in my ears with charming effervescence. To them, I was a novelty; a bridge between cultures. I laughed at jokes I didn’t understand because I wanted so badly to. Soon I found myself wondering, would I be like them if I’d grown up there? If my parents had never left?

In truth, if my parents hadn’t left, I’d never have existed. Mom and Dad met in New York City years after they’d immigrated from their respective countries, Ukraine and Lithuania. Were it not for the state-sponsored persecution they endured as Jews in the Soviet Union, which led to the dissident movement and their ultimate liberation, I wouldn’t be here. So in fact, one could say that I was born because of, or in spite of, anti-Semitism. While I’m not going to parse out the infinite sequence of serendipitous events that led to my conception, it’s neat to think that I somehow owe my entire existence to a piece of legislation.

As a proud Refusenik baby, I can’t help but be drawn to symbols of my heritage, but at the same time, letting something as fixed and predestined as ethnicity dictate my actions just doesn’t seem right. When I step back to dissect my behavior objectively, I feel uneasy. I feel bad for failing to embrace diversity more than I have been.

But then, by hanging out with Russians and Jews, I haven’t exactly shunned diversity, either. Eventually, I drifted apart from the festival crowd (partly out of loss of interest, partly out of inability to keep up with their conversations) and moved on to a clique that shares a different passion of mine — music. My Russian has gotten rusty since, but I’ve gotten much better at the guitar. Someday, I even hope to take it with me to St. Petersburg.

Samantha Shokin is a freelance writer in Brooklyn.

Related: Around the World in 63 Moishe Houses

Samantha Shokin is a freelance writer in Brooklyn.