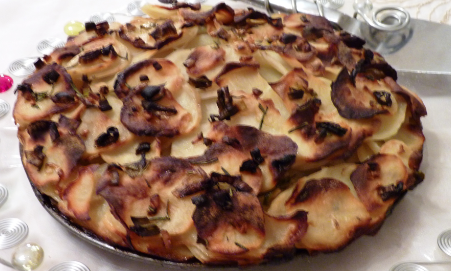 When it comes to the latke, the thought “if it ain’t broke, don’t fix it” comes to mind. From the first crunch until the rewarding warm soft gooey inside hits your taste buds, you become that much more thankful for the miracles which took place during these times generations ago.

Handed the task to reinvent the latke for Thanksgivukkah, I found myself scratching my head, and stumped by the latke’s sheer beauty. How does one reinvent one of their favorite traditional dishes?

I’ll tell you my secret, you don’t.

Instead of trying to create a new deep-fried patty that fixes the original latke’s nonexistent flaw; I decided to pay homage to the dish we all love: the latke, with a new French twist.

The galette is a traditional French potato dish nearly as old as the Ashkenazi classic, the latke. Both dishes are rich in heritage and flavor. Thin, crisp, fatty, and starcharific, these two are classics for a reason.

When recreating the standard latke, I came up with only one major flaw: it’s way too small. The latke/galette fusion solves that. The potato galette is almost like one large latke, but even better considering the first ever Thanksgivukkah, it’s a fancy gigantic latke.

Follow this recipe, and you’ll have one tasty and large latke that can be sliced and served to your family while looking as elegant as your holiday table.

1. Heat 1 1/2 tablespoons of olive oil in a medium pan over a medium low heat

3. Let them cook for about 12 minutes or until the contents of the pan have softened considerably. By then most of the liquid in your pan should have evaporated.

4. Slice your potatoes with either a food processor or a mandolin.

7. Fill the bottom of your spring fold pan with overlapping layers of potatoes. Try to use approximately 1/3 of your potatoes.

8. Sprinkle 1/3 of your cooked leek mixture on top of your potatoes.

9. Now spread an additional 1/3 of your potatoes on top of your leek mixture, creating an overlapping pattern.

11. Now spread the final layer of potato slices on top of your galette before sprinkling the final 1/3 of the leek mixture.

12. Bake your galette in the oven for about 40 minutes, or until the top layer of potatoes slices begin to turn dark brown and wilt slightly.

13. Now cover the spring fold pan for 10 minutes with aluminum foil and cook for an additional 10 minutes before serving.

14. Serve immediately, with or without apple sauce!