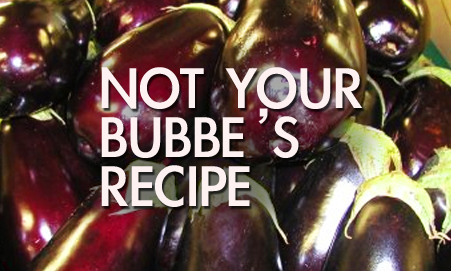 It’s game time: Kiddush has been made, hamotzi has been sung out loud, and challah has been handed out. Time to dig in.

Looking around, you spot the usual suspects in which to dip your blessed bread. There’s some hummus, maybe some egg salad, and there, hovering at the edge of your vision, is what looks like a pile of cement. It’s gray, it’s mushy, and it’s its ingredients are unidentifiable. Yep, it’s baba ghanoush.

Back in the day, bubbes all over the Middle East made baba ghanoush out of ripe roasted eggplants, fresh lemon juice, and some homemade tahini. Without a mass production line as a middleman, they got something creamy and delicious. I’m sure that when they ate it in Lebanon, where this recipe originates, passion and devotion were the hidden ingredients, and not unpronounceable preservatives. Yet, that’s not how we often find it now. I don’t know about you, but mine always come in a plastic container, blended with unpalatable ingredients listed on the label.

Classic baba ghanoush might have the same shape as flubber but doesn’t have quite as much life in it. Israelis don’t mince words and they label the endless selection of mass produced baba ghanoush “chatzilim bemoynez” (eggplants in mayonnaise). The Sabra version was adapted from Israel’s neighbors but often mayonnaise is substituted for tahini. You know how we feel about mayonnaise, it’s like substituting flavor for something that prevents the spread’s other ingredients from shining. Surprisingly, the Arabic translation of baba ghanoush is something like “spoiled father,” presumably because anyone who eats it is immediately spoiled by the unique flavors of the dish. I guess somewhere this got lost in translation.

That’s where this deconstructed baba ghanoush recipe comes in. Instead of mixing everything together, creating the consistency of something that can be consumed with a straw, this salad has chunks of roasted eggplants, fresh lemon, and whole sesame seeds. Instead of eating mush, enjoy something chewy and satisfying. You don’t need challah to make this baba ghanoush digestible; it’s great on its own. It stays true to its roots by being fresh and bold, but stays far away from anything you can find in the supermarket. The only plastic container you’ll find this salad in, is one in the back corner of your fridge, so your family won’t get their hands on your delicious leftovers; and that’s only if there are any left.

Not Your Bubbe’s Baba Ghanoush

1. Mix together all your ingredients, except for the sesame seeds, in a large Tupperware. Make sure to combine them well so that the ingredients fuse properly.

2. Let your salad ingredients marinate for at least two hours and preferably overnight. The more time they sit the more depth the salad’s flavors will have.

4. Roast your sesame seeds for a couple of minutes until they turn brown, but be careful not to burn them.

5. While your sesame seeds are roasting, drain your salad, and put its marinade in a bowl. You can later toss your salad with its marinade to give it a bit of a touch up before serving.

6. Place your salad ingredients on a roasting pan and roast them for about 15 minutes. They are ready when your eggplant is soft and slightly burnt; but not mushy.

7. Toss your vegetables and seeds with some of the marinade according to taste and serve.

Not Your Bubbe’s Mandel Bread

Not Your Bubbe’s Cranberry Crunch

Not Your Bubbe’s Cole Slaw