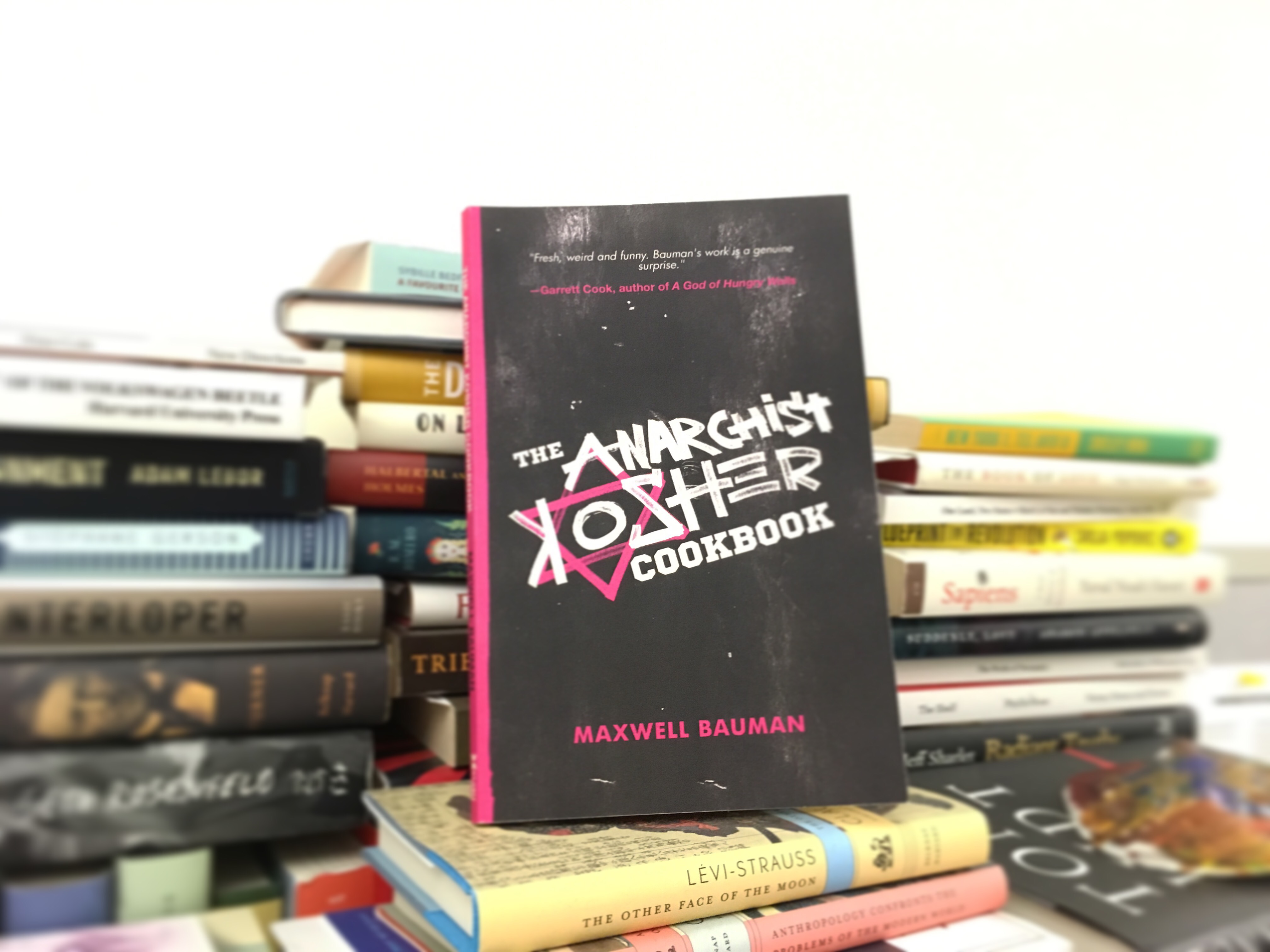 Maxwell Bauman is not running out of imagination. When he’s not creating some magical construction out of Lego, he writes outrageous, Jewish-inspired horror stories. Six of these stories have made it into his first published collection, titled The Anarchist Kosher Cookbook (Clash Books, 2017).

No, it’s not a literal cookbook. It’s an unpredictable mix of morbidly sexual, irreverent, at times hilarious narrative elements, manifestations of Bauman’s Jewish humor. This Cookbook may not rewrite any popular recipes, but it does rewrite some of the teachings and stories every nice Jewish boy is told at a young age.

Think of the Biblical episode of God manifesting itself to Moses through a burning bush. In Bauman’s story, the “bush” happens to be a Jewish woman’s pubic hair. She wakes up one morning to find her bush in flames. The pubic hair speaks: “I will open your womb only for the Junior Rabbi Kauffman.” The woman is torn between following the will of God and staying faithful to her gentile partner.

Bauman, 28 years old, was born and raised in the Bronx, but now lives in Massachusetts. He likes to describe himself as a “halfway-decent Jewish boy.” By day, he’s the editor in chief of a small literary magazine titled Door is a Jar. The morning we spoke on the phone, Bauman had just finished creating a black raven with Lego (You can see a photo in Bauman’s Twitter account, where he shares all sorts of Lego-related news).

Both of his parents are Jewish, but Bauman was not raised in a religious household. “I even protested having a Bar Mitzvah,” he said. “Because I didn’t want to lie and say I was going to dedicate myself to God and serve the community all for a dumb party.” This episode inspired one of the collection’s characters, who goes through a much-relatable bar-mitzvah crisis.

“I rewrote the stories many times,” he said. As he began writing the book, he adopted what’s known as the snowflake method, developing what was at first one joke into a larger picture.

In one story, that core gag is how the return of the Messiah interrupts a couple’s honeymoon is Martha’s Vineyard. The savior, however, turns out to be a disgusting, deformed man that does indeed raise the dead and turn them into a horrific army of zombie-like creatures. The book’s titular Anarchist Kosher Cookbook story is written as a list of instructions to create a golem to fight Neo-Nazis and anti-Semites and, why not, also get some late-night loving (“You can find the parts of old golems in the attic of any synagogue. It’ll be in the box labeled ‘Xmas Decorations’”).

Bauman has some brilliant ideas, albeit ones that are sometimes polluted with less hilarious, at times cheaper humor. In more than one instance, the narration goes on tangents that can detract from the core, more creative ideas. These passages may not contribute to the overall quality of the work, but with leviathans, dybbuks and Baphomitzvahs, the Cookbook will still leave you hungry for more stories.