I Love Crown Heights: How A Chabadnik Became the Neighborhood’s Maven of Literature

Just as Egyptians used the tools they had to construct a successful revolution, Penina Roth took the resources of what Crown Heights has to offer today–a large presence of writers, professors, West Indian and African-American locals, and new transplants, and took them into a bad bar joke with the punchline being a monthly reading series that attracts literary personalities on the caliber of Colson Whitehead, who is headlining today’s Franklin Park Monthly Reading Series installment at Franklin Park Bar & Beergarden.

In December 2008, the idea for the series came to Roth, and since it went underway she has been its curator/ producer/ host/ publicist/ and literary organizer. She tries to feature Crown Heights writers as often as possible. And in the process, her obsessive and passionate pursuits of iconic writing for the series is working to coalesce the literary community while promoting a positive image of the neighborhood. “It’s very important to me to feature a wide range of voices, reflecting the neighborhood’s cultural diversity,” explained Roth. “We’ve hosted authors from Haiti, Panama, China, Nigeria, India, Vietnam, all across the U.S., and even a hipster Hasid (twice).”

Raised an army brat, she was used to a heterogeneous populace. She eventually developed an inclination towards fashion, which took her to LA in the 90s. But raised Modern Orthodox and later turning to Lubavitch spirituality, neither leaning gelled with her pursuits as a wardrobe stylist, where she worked on shoots for blingbling rap and Hip hop videos. The shoots required more of her time sheet than her no-work-on-shabbos lifestyle allowed for. Unable to accept the mostly Saturday gigs, Roth, broke, moved to Crown Heights. As an undergrad at Hunter, she’d majored in writing, and, when she returned to NYC, launched her writing career.

With an eye for local reporting, she quickly realized that not much was being written about Crown Heights beyond racial tensions. She took pride in her domain’s flourishing arts community as well as the growth of the local economy. The kinetic mix of Caribbeans and Hasidim, grad students and professors, writers and journalists sparked her interest as a freelance journalist and researcher. Collective efforts across demographics in the neighborhood worked to fight crime via the city’s Operation Impact and other projects.  She finally set out to conduct her own research that served up juicy observations from within, culminating in the publication of her important article on Franklin Ave gentrification in The Sun, which was followed by a spur of confused articles on Crown Heights culture by prominent journalists as well as journalism students that made naive generalizations about population dynamics. 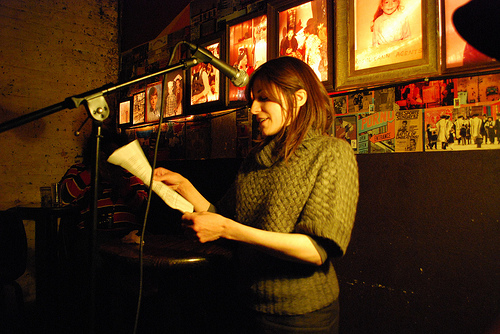 AN ETHOS OF GIVING

While realtors are busy toning down the locale, Roth along with Crown Heights residents, business owners, and such advocating blogs as ilovefranklinave.com and nostrandpark.com are planting various forms of seeds and cultivating the potential they see in their stomping ground. After Roth began promoting the series, she had found authors enthusiastic to participate, and she found it equally satisfying to hook up writers with their community. With the increased literary-minded population, Roth set out to acknowledge the existing arts community in keeping in contact with organizations like the directors of the Center for Black Literature at Medgar Evers College, the sponsors of the biannual National Black Writers Conference. Perhaps it was her experience with such mentors as Dani Shapiro, David Goodwillie, Jennifer Egan, and Sue Shapiro (all of whom have read in the series) that instilled this ethos of giving from experienced to novice writers.

The community-oriented event engages Heights residents as often as possible, trying on local high school interns for size, while local IT professionals, designers, and others have enthusiastically flocked to contribute what they could. Meanwhile, Unnameable Books, Prospect Heights’ local indie bookstore sells books at the events. Franklin Park Bar and Beer Garden’s owners, Anatoly Dubinsky and Matthew Roff, profiled by Roth in The New York Times’ BoÎte, have been generously supportive of the reading series that has even proven profitable on second Mondays. The series puts Roth in the very same limelight that Roff used to showcase such clutch Jewish Rock groups as Heedoosh and haMakor at Southpaw that influenced her synthesis of personal spirituality with artistic enterprises.

Roth’s affinity for literary fiction expanded in her series to well-written memoir through such incredible voices as Nick Flynn and Stephen Elliott. Lately, she has been trying to open up the series to more experimental literature.  Notable authors quickly joined the ranks, eager to sign up as Crown Heights cheerleaders and mentors to burgeoning writers. Such eternally relevant authors from the literary community that have shown face at the series have included Justin Taylor, Mary Gaitskill, Rick Moody, Amy Sohn, Ben Greenman, Rachel Shukert, and Greg Gerke among many others. In the end, Roth managed to harmoniously reclaim literature from its academic perch and take it to the streets to share with the community in which many of the prominent Brooklyn College, Columbia, NYU, the New School, CUNY and Sarah Lawrence professors live themselves. In the spirit of generations, the diversely aged writers are inherently helping to establish a new generation of readers outside the classroom.

I JUST WANT TO HAVE A GOOD TIME

The series’ bar atmosphere sets it up for a fucking good time. Poignant yet funny 10 minute storytellers, comedians, and sometimes musicians do their thing while about 100 party animals enjoy no-cover and dope drink specials. “Because I’m a book groupie I always treat writers like movie stars,” said Roth, acknowledging the funny duality of that tinge of fan with her responsibilities in presenting the authors. The sweet stuff of boozed up schmoozing, however, puts everyone on the same plane on which series-goers, bar regulars, and other locals can go tête-à-tête with the important writers of their generation.

Book groupies can expect to spot the familiar mugs of notable literary personalities in future readings, including Deb Olin Unferth, Jami Attenberg, Darin Strauss, and Karen Russell, the last of whom was the first author on Roth’s wishlist for the series.

With this reading series, Penina Roth plays a role similar to Milton Glaser in the 70s, rejuvenating love of one’s city by way of the arts. And you’re invited to love Crown Heights too.