The play isn’t about Jews. But it could be! Read More 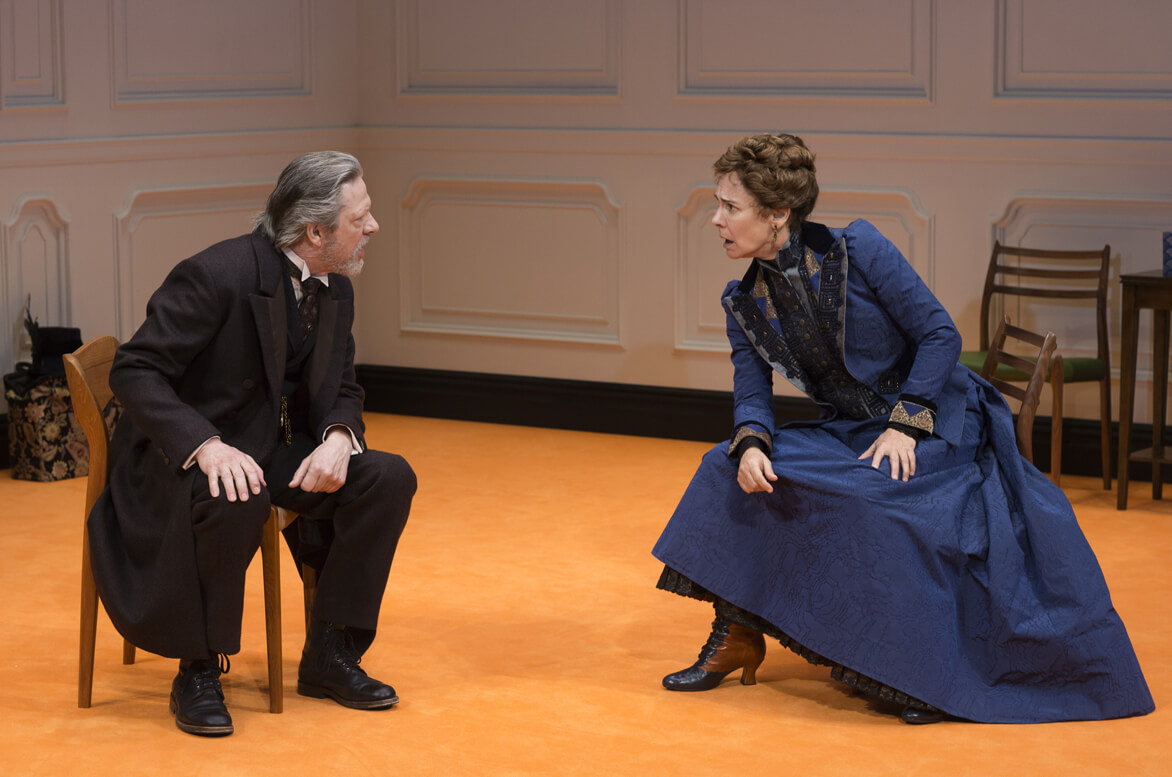 Playing on Broadway currently is A Doll’s House, Part 2, a sequel of sorts to Henrik Ibsen’s 1879 drama about the collapse of a respectable marriage. The play, of course, isn’t about Jews; there were virtually none in Norway until 1892, only about two years before Lucas Hnath’s new play takes place. But there are parallels between the 19th century period drama and a problem in the Jewish community today.

The “Part 2” to A Doll’s House takes place fifteen years after the conclusion of the original play, when Nora Helmer has finally realized that her marriage is toxic, and that she has no identity of her own outside of that of wife and mother, so she leaves her family. Part 2 begins when she knocks on the door through which she had left. It turns out, despite her thinking otherwise, her husband, Torvald, never filed their divorce. Having made enemies for her radical beliefs about women and marriage, Nora now realizes that she is vulnerable to legal action for acting in a way a married woman in her society may not— like owning property, and having lovers.

But the law has another unfair obstacle against women. A man may quickly, and for no reason, obtain a bill of divorce from his wife. A woman must begin a protracted legal battle, in which she must prove she deserves her freedom, with extreme allegations such as that her husband was abusive.

One strength of the play is how modern it feels; though the setting is firmly nineteenth century, the characters speak with modern voices, and their debates feel fresh, from conversations about feminism to the question of why we even have the institution of marriage. But it is in the inciting action of the play, Nora needing Torvald to be free, that wouldn’t quite apply in today’s society.

Well, in today’s secular, American society. While divorce is largely a lengthier process than a trip down to the town clerk, it tends, at least on paper, to provide equal footing to men and women alike. Not so in Judaism (and by extension, Israel), where a marriage ends when a man presents a woman with a divorce document. Even when men eventually relent and grant their wives divorces, it often puts them in positions of power, having the upper hand in negotiating finances, custody of the children, et cetera.

In A Doll’s House, Part 2, Nora finds herself similarly beholden to Torvald, after taking it on blind faith over a decade ago that he would do what they agreed. Although their marriage has been over for fifteen years, she suddenly finds herself coaxing, pushing, even manipulating to make a formal end of things that would set her legally free. All he has to do is sit there and become convinced, or not.

Torvald is clearly not a bad man. But as the man, he holds the power, and while it doesn’t exactly corrupt him, he’s not eager to level the playing field. Nora, the early feminist, is furious at the unfairness of it all. Even outside of her own circumstances, she wants the release of women everywhere from the bonds of marriage; she considers it a cage.

How upset would Nora be that over a century later, even when so much has changed about marriage and women in society, some women are still stuck in shells of former marriages, because the man refuses to relinquish his power over her?

And how much of a shondeh is it that it’s happening in parts of our community?

Photo of Chris Cooper and Laurie Metcalf in A Doll’s House, Part 2. By Brigitte Lacombe.