Fash Bash Bash: A DIY Film Festival of Nazis Getting Punched in the Face 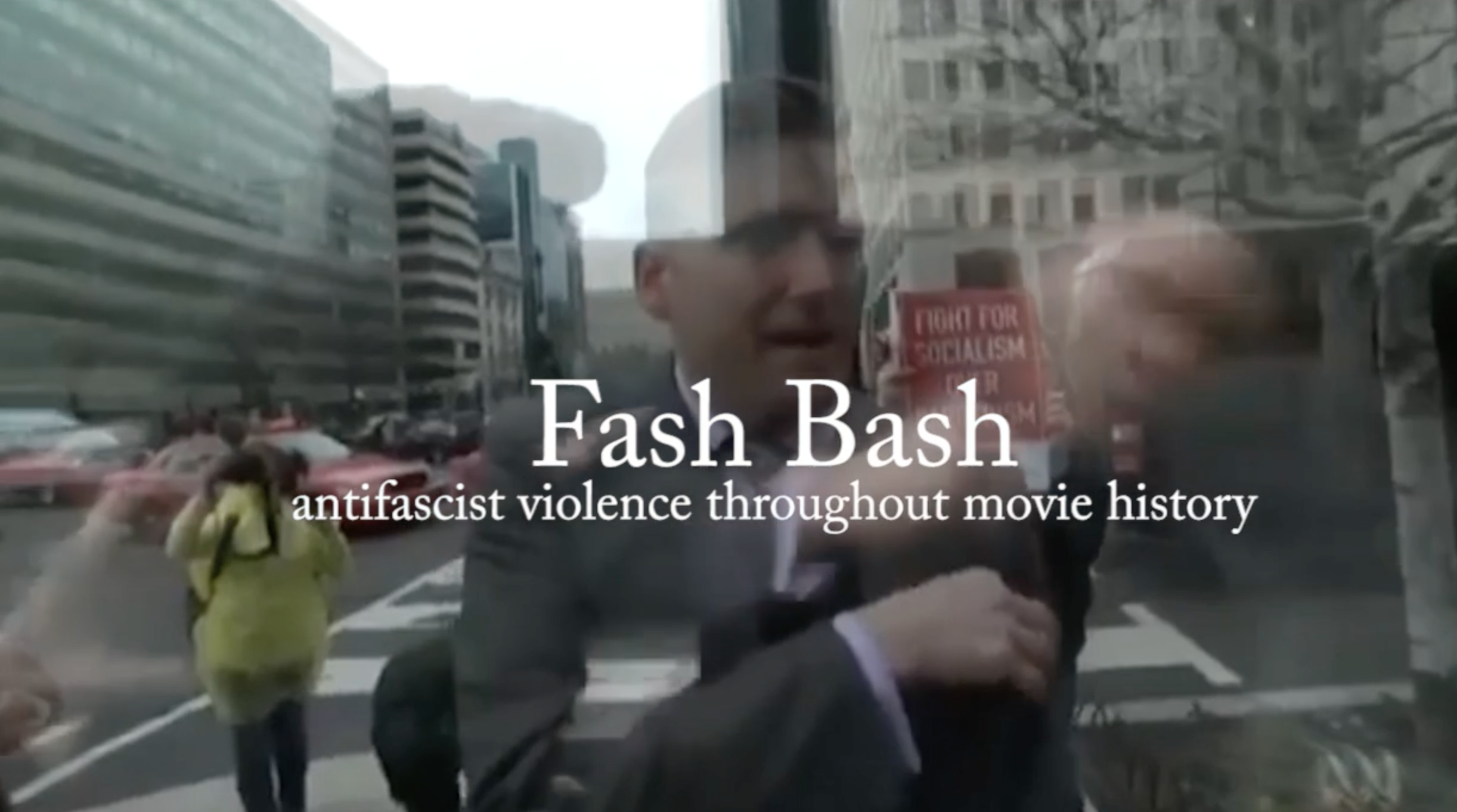 Sure, the Oscars were last night, but between some questionable awards and the high-stress mistake at the end, no worries if you weren’t in the festive spirit. So, let’s try again.

Throw a different sort of party: watching Nazis get punched in the face—over and over again. Between the perpetual bomb threats, subway vandalism, and cemetery desecration, it’s been a long month for the Jews, so let’s take our catharsis where we can find it.

Inspired by the gleeful response to a certain recent viral video, earlier this month, The New Inquiry, a cultural magazine, hosted Fash Bash Bash, a one-night film series of Nazis getting punched in the face (or otherwise bodily harmed). Overlooking the stormy waters of the East River, a wind-whipped gathering of journalists, activists, cinema buffs, and hipster antifascists sipped on $5 punch spewing out of a rubber costume-store effigy of Donald Trump’s head and crammed into seats and standing areas on the hardwood floors of Verso Books in Brooklyn’s DUMBO neighborhood.

“I’ll be your gay Jewish host for the evening,” a New Inquiry editor introduced himself together with a few ground  rules for the evening. No audio or visual recording of the event was permitted—ushers stationed at every doorway and elevator bank unspooled reels of stickers to affix to the camera lenses of every phone that entered the building—and anyone interested in writing about the event was instructed to use false names in their report to protect the identities and safety of everyone assembled.

The first feature of the evening was the clip of Richard Spencer getting punched in the face on live television, set to Rachel Platten’s “Fight Song” (did you know she’s Jewish?). The video was presented by a journalist who has been covering the National Policy Institute—Spencer’s platform—since it emerged.

“Without Spencer, NPI would just be assorted crackpots and cranks,” she explained. Seeing him physically attacked in the middle of delivering racist hate speech on national television on the day of Trump’s inauguration was a powerful image for everyone who saw it, and watching it paired with the Clinton campaign’s theme song—which Team Trump used to ridicule her—”seemed like the right foot that the resistance needed to start off on. The guys are real Nazis,” she warned of self-named Alt-Right. “At their national conference right after the election, Spencer toasted to 1933—he claims it’s ironic; he cites Mein Kampf—he claims it’s ironic. But it’s not. And since these videos, antifas have been showing up to these events in droves.”

Next the founder of One People’s Project, a media platform that keeps an eye on right-wing hate groups, introduced his work.

“We tell people what’s going on, what to do, and who we should do it to,” he explained, pointing the the screen above, showing Richard Spencer’s blow to the face on loop. “I’ve been chasing after this son of a bitch for 11 years!” His cinematic selection was from American History X: Edward Norton punching Stacy Keach in the face.

“They got lucky today,” the presenter quieted the cheers from the crowd, waving One People’s Project “HATE HAS CONSEQUENCES” bumper stickers in the air. “Luck runs out.”

As the clips went on, the set list took a turn for the absurd with Dead Snow, a 2009 Norwegian zombie flick about three average Jans with chainsaws and a snowmobile mowing down a troop of Nazi soldiers that had frozen, presumably to death, during World War II, now returned as the undead following a thaw.

“I’m pro-zombie,” the writer who selected the clip leveled, “I really identify with zombies. Unless they’re fucking Nazis.”

Then came the blockbusters, extemporaneously introduced by the evening’s host—the gay Jew, remember?— “Whatever, fuck Nazis, am I right?” he wrapped up, “Bash back, bitches!”

It was a fitting battle cry for the scenes that ensued: Michael Fassbender sighing archly about the “certain level of hell for people who waste good Scotch” before gunning down a bar full of German officers in Quentin Tarantino’s Inglourious Basterds (2009), and Michael Fassbender again, in another bar, as young Magneto in X-Men, First Class (2011). “Another reason to love Michael Fassbender,” murmurs arose from the audience as he sauntered, friendly as a hungry snake, toward the unsuspecting proprietor and his friend—high-profile Nazis escaped to Argentina—to introduce himself: “Let’s just say I’m Frankenstein’s monster.”

After the Fassbender bender came the inevitable frenzy of Indiana Jones. Cheers went up at every punch, each delivered with hearty input from Spielberg’s sound team. And at the moment when the Shekhina’s visage sharply morphs into an ominous expression in Raiders of the Lost Ark, the excitement ramped up to a roar in anticipation of seeing Nazi’s faces melt clean off their bones.

The evening’s final speaker demanded a moment of serious reflection out of the three hours of cinematic catharsis, to be followed by a dance party for any and all who chose to stay.

“We need to be better than liberals laughing at fascists being bashed in the face, retweeting that meme, sharing Trevor Noah eviscerating Tomi Lahren,” she reminded the crowd, calling for action and getting organized. Her selection, the image with which the entire series ended, was the final scene from V for Vendetta—an ambiguous ending, in her mind, but one which “it’s not always an individual act, it’s not always Richard Spencer being punched in the face.” But when it is, when we have that moment, when we have it recorded: “Long may it live and long may it be repeated.”

And you can now repeat it yourself, at your own party— you can watch the 40 minute clip reel below: Image via Fash Bash Bash