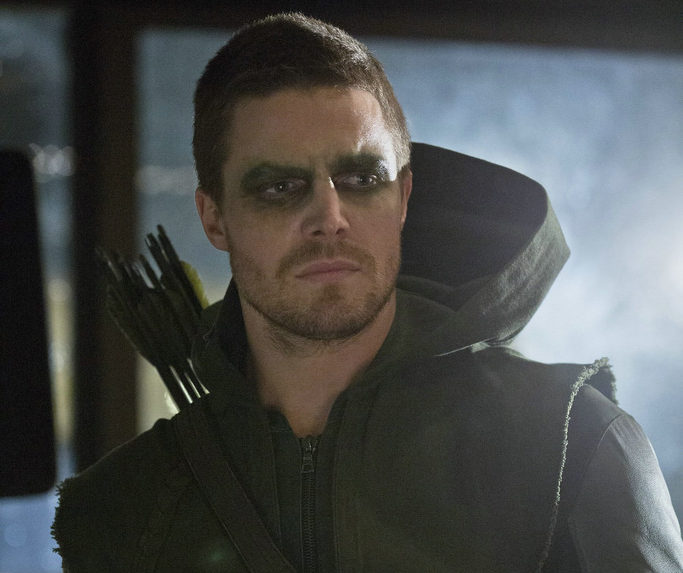 It’s official! The latest piece of mainstream culture to be more Jewish than you expected is Arrow, the TV show about the DC-comics superhero Green Arrow.

There’s no point getting into the nitty-gritty of the plot, but suffice to say, on last night’s episode, characters on the show need to hack alien technology. Ultimately, they are faced with a screen that looks like the matrix, or a screensaver from Windows about ten years ago. One character immediately identifies it as gematria.

Or, rather, he says it heavily accented and exotic sounding, elongating the first syllable and almost rolling the R, a bit like “Gay-matrrria.” Strike one.

“Gematria is the numerology—” he begins, “of the Torah,” another character finishes for him. That would be strike two. It’s from Jewish tradition, certainly, and is often applied to the Torah, but it post-dates the Bible, and is more readily associated with kabbalah.

“For the gentiles and those of us that actually had social lives in high school, what the hell are you talking about?,” Asks a third character. If we’re running with the baseball metaphor (heaven help us), that would be a foul ball, staying on strike two. It’s cute that non-Jewish nerdy teens would be reading up on this sort of stuff, but that seems rather unlikely.

“In Hebrew each letter possesses a numerical value. Gematria” (Gay-matrrria!) “is the calculation of the numerical equivalence of letters words or phrases.”

That’s… actually a pretty apt description for it, yes! Though strike three comes from the lack of explanation of how exactly this translates to a coding language. Something, something, letters become numbers, something something, it makes alien tech go.

One character does point out the obvious— that it’s rather strange that aliens would be using something connected to the “Old Testament” (ugh, that phrase). But perhaps, someone else observes, this lends credence to the theory that a divine presence guides the entire universe.

It shouldn’t come as a surprise that one of the episode’s writers, Marc Guggenheim, is Jewish. Guggenheim is one of the creators of the show, which may explain details like an underground facility being called “Tevat Noah” to make it sound fancy, or the character of Ragman.

See, Ragman deserves special mention— while he is not as overtly Jewish in the TV show as his comic book counterpart usually is (you know, retcons), he does wear “Devarim rags,” that grant him his powers, so called because they hail from “the ancient time of Devarim.”

So… is the era of Devarim post-Exodus, when that book of the Torah takes place? Or would it refer to the reign of King Josiah in the 7th century BCE, when the book of Dvarim was introduced to the people of Judea (and written, according to some scholars)?

Well, it’s easy (and fun) to tease, but kudos to a modern comic book property for actually having a tie, however strange, to its roots. Green Arrow’s original creator Mort Weisinger was, like almost all comic history greats, a Member of the Tribe. DC continues to trounce Marvel in this department, if in not very many.

Then again, they managed to have a conversation about Jewish tradition without actually using the word Jewish. What’s with the shyness, if you can say the words Torah, gentiles, and Gay-matrrrria? Maybe it sounds more ancient and sci-fi to around the tradition from which you’re borrowing.

That’s OK; you can invoke it next time you have alien technology to hack.