Jewcy Interview: ‘Soon By You’

A chat with the creative team behind the new web series about the Modern Orthodox dating scene in New York City. Read More 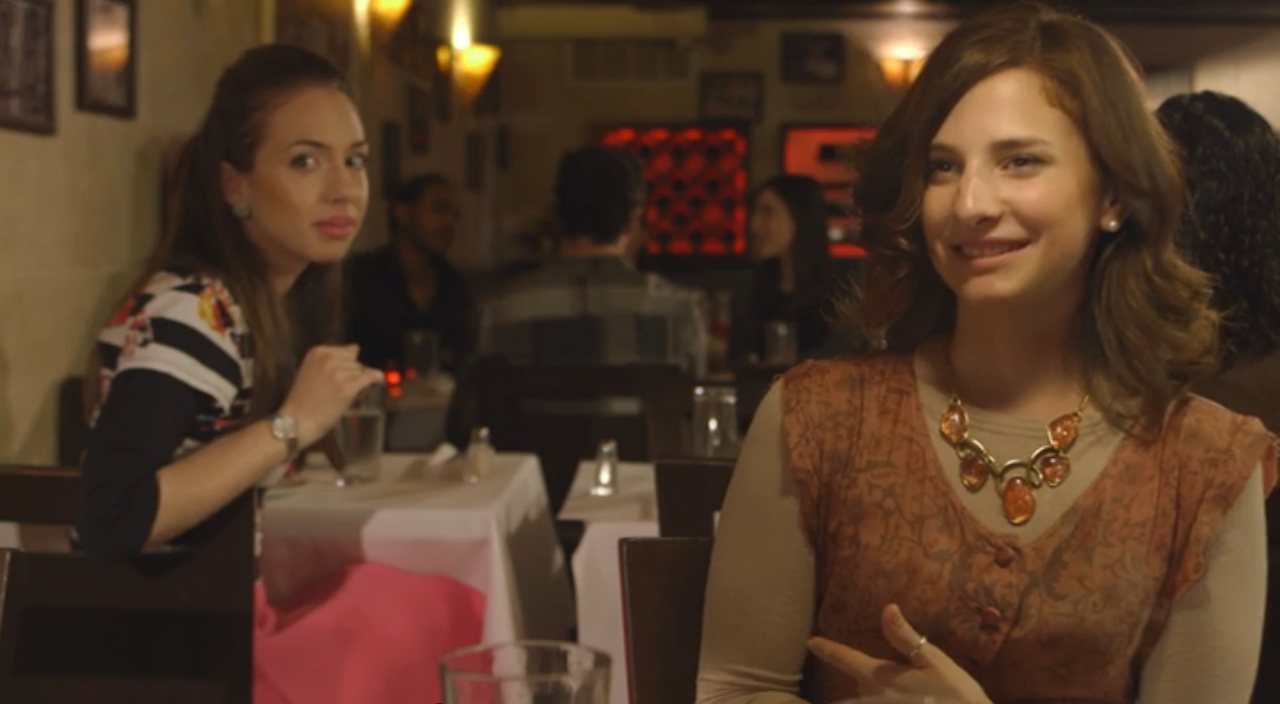 Now streaming on YouTube, the pilot episode of “Soon By You” follows a would-be couple that really clicks when they accidentally sit down across from each other in a kosher restaurant before their real –and far less fitting – dates arrive. Jewcy met up with director Leah Gottfried and producers Jessica Schechter and Danny Hoffman, all of whom pull double-duty as actors on the show, in a kosher-certified Coffee Bean in midtown to see how this exciting new show got made. Leah: Almost two years ago, I started writing The Setup as a short film. It was really inspired by the Israeli TV show Srugim. After the short film started getting into film festivals and people watched it and wanted to see what happened next, I realized that it was a web series – a series. The topic of dating in the Modern Orthodox world is something I would love to watch. I kind of wrote it for myself, to showcase the drama I go through and that my friends go through.

Danny: My involvement in the first episode was solely as an actor. You don’t see this subculture represented in pop culture much these days. There’s no shortage of Jews in film and TV, but no one between ultra-Orthodox and mostly secular. The opportunity to be involved was very appealing, and when Leah began to think of it as more of a series I could not forego the chance to be more involved as a writer and producer.

Jessica: Leah and I have been friends for a long time. I’m a stand-up comedian and gave Leah some ideas from my life experiences. I’ve been in the dating world for a long time and I think it’s really important to give it a voice and some perspective, and to be able to laugh at and with it.

Jewcy: Are the “wrong dates” based on any experiences you have had?

Leah: We definitely talk to each other and tell each other stories. A lot of the little nuances are pulled from real life whether or not they actually happened like that.

Jessica: People not getting your jokes is definitely real. Danny’s character has the same opening jokes for both girls, and one gets them and the other doesn’t.

Danny: I don’t know, I think every single one of the jokes I’ve ever told has landed, so I can’t relate.

Jewcy: Have you received any interesting feedback?

Danny: One YouTube comment asked why Sara didn’t make a bracha over the wine. Someone else pointed out that Sara is an artist and Danny is a rabbi – did anyone think about how they’re going to make a living?

Jessica: It’s really fun and exciting in this YouTube world that people can tell you what they think right away.

Leah: I love the comments where people say that they’ve been through awkward dates just like that. What’s cool is that it’s not coming from the same kind of person – people who aren’t even Jewish, or are ultra-orthodox.

Jewcy: Do any American shows or movies show a positive depiction of Jewish observance?

Leah: No. Whenever I see a Jew in a show that I’m watching, it never feels authentic to me, which is a problem I want to address in this show. I don’t blame the writers – there are no Orthodox Jews in the writer’s room. But that’s the process we’re trying to address.

Jessica: The closest thing is the movie Arranged, which was written by an Orthodox Jew. It captured an element of Jewish dating, but they were ultra-Orthodox. Jewcy: What is the release and filming schedule for future episodes?

Leah: We’re releasing a trailer this week, and the second episode is close to a final cut. That will hopefully also be released within the next couple of weeks. We’re writing episode three and fundraising to film it. Everything depends on the fundraising – the more money we have, the quicker we can move.

We partnered with JENLA – the Jewish Entertainment Network LA. They have a new fiscal sponsorship program, and we’re the pilot. People can donate to that – it’s a great incentive for anyone who wants to support our project. We’ve also teamed up with Shabbat.com.

Jewcy: Do you have any idea of how many episodes you’d like to make?

Danny: And a movie! No, at this point, what we’ve been planning is a five- or six-episode first season.

Leah: We have five episodes outlined. There are two new characters in episode two – they’re both hilarious additions. From episode two and beyond, there will be an ensemble cast of six.

Jewcy: What has surprised you in the process of making this series, and what have you learned?

Jessica: What I’ve discovered in dating is that people are very nuanced, and we want to bring that out in this show. Every person has a family and circumstances that has made them who they are. We have these interesting and wacky characters, and uncovering their journeys is really great.

Danny: The stories have certain Jewish elements in them, like an episode that takes place on Shabbat, but the stories and the characters don’t revolve around their Judaism. In the first episode, we mention that one character’s aunt set her up with a lawyer guy, but there’s not too much that people wouldn’t be able to relate to if they don’t know anything about Judaism. We’re identifying ourselves as Jewish artists and putting forward Jewish art, but it’s about people, about life, and about relationships. People get that. People don’t have Jewish relationships – they’re Jews and they have relationships.

Leah: We’re not teaching the audience. It’s not a class on Judaism.

Jessica: The coolest thing for me is that, in the middle of a full-day shoot for episode two, we all sat down and had kosher pizza in Washington Heights on set. As an artist, you’re always worried about those kinds of things and having to compromise your values. We’re really changing the landscape of what’s possible.

Danny: I was surprised to learn that Sara Schur, who plays Sara Feldman, also has restrictions because she’s a Seventh Day Adventist.

Leah: A lot of our crew is also Orthodox. There are so many creative people in our world, and a lot of them struggle because they don’t feel they can pursue a creative career because of the restrictions. We’re flipping that on its head.

Danny: We’re trying to take a look at different levels of observance that all fall within Modern Orthodoxy. In a future episode, we’re looking at a character who has trouble with work coinciding with Shabbat and having to juggle that, which nobody doesn’t deal with. It’s a Jewish show about dating and also a show about Jews.

Jessica: It’s about their lives. Single Jews and what they go through, and the adventures that come with that.

Check out the first episode of “Soon By You” right now below!