What works of literature explore the Jewish affinity for America’s pastime? Read More 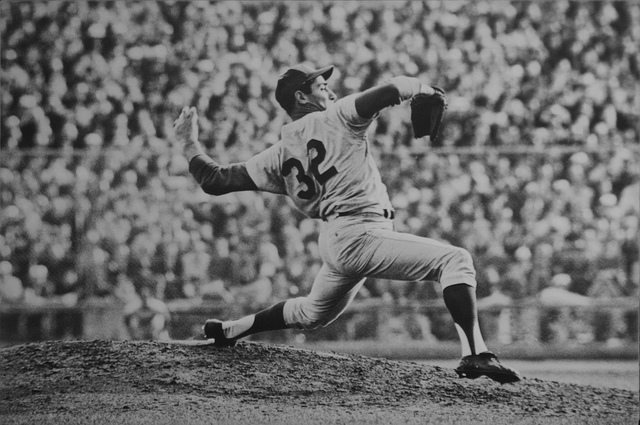 When we swing, we swing for the fences.

Perhaps more than any other sport, Jews have been drawn to baseball, both on and off the field, and in so doing, have established a kind of tradition, passing on stories from generation to generation. Hank Greenberg blasting two homers on Rosh Hashanah before sitting out on Yom Kippur, Sandy Koufax taking the bench for the first game of the 1965 World Series, even the latest jaw-dropping run by Team Israel in the World Baseball Classic—these Samsonian strongmen represent something bigger than themselves, and their success and failures have become a liturgy for the emerging Jewish baseball fan. Following suit on the page, authors—some members of the tribe, others playing for different ball clubs—have used blended Jewish ideas with baseball to create a new mythology.

The first stab at stitching Jews and baseball together on the literary field comes as early as the Roaring Twenties, although the scouting report is ill-favored for the home team. F. Scott Fitzgerald’s The Great Gatsby has survived perhaps rightfully as a commentary on the tarnishing of the American Dream, but perhaps wrongly for how it veers from crediting the affairs of apathetic WASPs to blaming a caricature of the Jew as a loyalty-less grubber: Meyer Wolfsheim. Wolfsheim appears as one of Gatsby’s shadier connections—to really drive the point home, Fitzgerald dresses him in human-tooth cufflinks—but the true source of his corruption is revealed later by Gatsby:

“Meyer Wolfsheim? No, he’s a gambler.” Gatsby hesitated, then added coolly: “He’s the man who fixed the World’s Series back in 1919.”

“How did he happen to do that?” I asked after a minute.

“He just saw the opportunity.”

Wolfsheim, as it turns out, is a barely disguised Arnold Rothstein, often attributed with doing just what Gatsby accuses—fixing the World Series and getting away with it. It is clear from Gatsby’s distaste that he sees something perverse in a Jew bleeding the sacred cow that is baseball for a couple coin, and in doing so he establishes the first of many strains of myth-making in baseball literature. Baseball’s original sin stretches so long that W.P. Kinsella’s Shoeless Joe (more popularly known in movie form as Field of Dreams) is still trying to atone.

Not the most auspicious start for a lasting relationship, though the irony is that Jewish authors and Jewish themes have long elevated the game in prose. Although not Jewish himself, Pete Hamill’s Snow in August transplants the golem from Prague to mid-century Brooklyn, where it is brought to life by a Holocaust survivor and his young Irish Catholic friend. The book uses baseball as a canvas for its themes of intolerance, and though not implicitly drawn, the true golem of the story is Jackie Robinson, beginning his history-making turn in the majors, who echoes the golem’s traditional purpose as a symbol for the oppressed. James Sturm takes the opposite approach in his graphic novel, The Golem’s Mighty Swing, which demystifies the image of the golem in a story of a barnstorming Jewish baseball team during the Great Depression and exposes the limits of how far baseball can truly take the American Dream when it seems rotten at its core.

With a more cosmic perspective, however, comes Michael Chabon’s YA novel, Summerland, a blender of Native American and Norse mythologies, all centered around a belief that baseball is a tool of champions. Chabon provides a typical hero’s journey, but with a twist: the battleground? A baseball diamond. The stakes? The end of the world. The hero? A kid who only needs to catch one good game.

In this sense, all roads lead back to the quintessential baseball novel and the man who married Americana and Arthurian legend to build a new motley mythos: Bernard Malamud’s The Natural. It tells the story of a man named Roy Hobbs, returned to the game after being shot in his prime years before, and how he tries to rescue a slumping team with his Excalibur-like bat “Wonderboy” while battling his own tendencies to succumb to temptation. Nothing about the novel is essentially Jewish, except perhaps its ending. Whereas the movie adaptation provides a true Hollywood moment when cornfed Robert Redfield shatters the lights with his pennant-winning homer, the book ends, in true Arthurian taste, with Hobbs striking out, accused of throwing the game, and erased from its history. Maybe King Arthur learned pessimism from the Jews.

There can be miracles, however, if you believe. In Mindy Avra Portnoy’s timeless children’s classic Matzah Ball, a young fan feels ashamed schlepping to the ballpark with his Passover-approved lunch—and even more awkward when his friends eat his lunch instead of their own, leaving him in the lurch. In this dark hour, an old man appears and regales the kid with tales of boyhood games in Ebbets Field and gifts him a very special piece of matzah before disappearing. You know how it goes now—the kid catches a home run using his matzah as a glove, and we learn that while there may not be angels in the outfield, at least Elijah has a seat in the bleachers.