Jews You Should Know: Samuel Byck

It’s not for a good reason. Read More 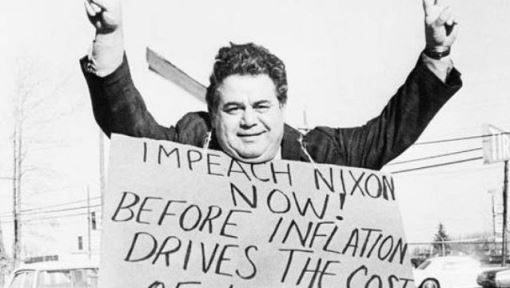 Depending on how you count, there have been about twenty serious assassination attempts on presidents of the United States in the country’s history. It’s nothing to be proud of, but did you know that one of the attempted assassins was Jewish?

Samuel Joseph Byck was born in South Philadelphia in 1930 to a poor Jewish family (did your Bubbe know him, perhaps?). On February 22, 1974, he set into motion a plot to kill Richard Nixon. It didn’t go well for him.

Prior to his violent scheme, Byck was an all-around schlemiel who more-or-less failed at everything he tried. He was a high school dropout who had difficulty holding down a job or starting new businesses. His wife divorced him, and took his four children (where are they today?). He fell into despair and became disillusioned with the United States, particularly President Nixon’s oppression of poor Americans.

Before his attempt, he began creating recordings of himself ranting, and sent them out  usually to famous figures he admired, including Leonard Bernstein and Jonas Salk (I’m not going to link to any of them here, but you can find some of these on the Internet).

Byck’s plan was this: Hijack a plane, kill the pilot, and fly it into the White House, killing President Nixon.

While Byck’s attempt was a decided flop, unfortunately, he did kill two people. The first victim was a security guard who confronted him. Next, Byck boarded a plane and threatened the pilot and co-pilot. When they explained that the plane couldn’t yet fly even if they wanted it to, he shot them both. Ultimately, the pilot survived; the co-pilot did not. As police attempted to apprehend Byck, he shot and killed himself. He was 44.

The assassination attempt didn’t even affect Nixon’s schedule that day.

Samuel Byck: Not a Jew to be proud of, but a Jew You Should Know. His legacy includes being played by Sean Penn in a biopic, and existing as a character in the Stephen Sondheim musical Assassins. On that front, you could do worse. So let’s conclude with Byck on Broadway, as played by Mario Cantone: