A glimpse at the return of our political comedy savior proves maddening. Read More 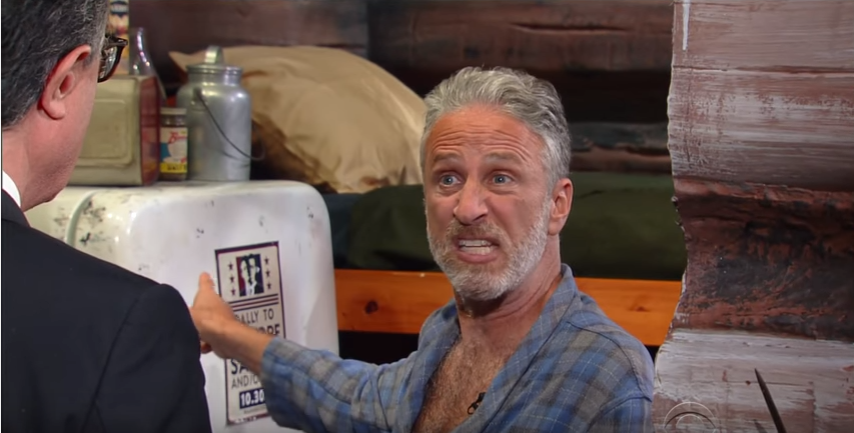 For those of you who don’t watch The Late Show, (or, you know, YouTube highlights the next day), you need to see part of Monday’s episode. beginning Republican National Convention coverage. You have to watch this. I’ll wait.

OK, now that you’ve witnessed that bit of comedy splendor, you can join me in missing the heck out of Jon Stewart.

I do find it adorable that in his self-imposed exile, Stewart seems to have become a zeyde, still the same Jewish comedian, but older, fussier, and even more fed up with the world than he was before (nice joke about kippot there, too). I know he’s only 53, but I almost expected him to be wearing his pants up to his chest in traditional grandfatherly fashion.

After all, a large part of what made Stewart a great presence on late night TV was his uniquely Jewish attitude towards the absurd politics unfolding in front of him: There was frustration bordering on righteous anger, and a wit, and with a cynical candy-coating from a man whose people have seen it all. “You’re not crazy,” Stewart seemed to urge us, “It’s the world that is upside down.”

Years ago, I went to a taping of The Daily Show, and when the audience was given a chance to ask questions, I trotted out my then stock-prompt for Jewish celebrities about the impact of their identity on their work. Stewart told me that that it’s a part of his genes (I believe he made up a component of DNA he called “Jew-nine,”) and said that it related to his fear of being kicked out of whatever country he was in. Clearly, this Jon Stewart hiding out in a cabin in the woods still has such a genetic neurosis. And while his departure from The Daily Show wasn’t the death of comedy, it left a Jewish-sized hole (whatever that means) that’s still unfilled.

Yes, Trevor Noah has Jewish ancestry.  But regardless of how he feels about his own identity, there have been enough think pieces explaining why he’s failed to sustain The Daily Show‘s legacy. He’s no longer a substantial part of the political comedy equation.

This isn’t to say that the landscape is barren; John Oliver and Samantha Bee do fine jobs, fitting different niches in the political comedy sphere. And Bee even mentioned Sheldon Adelson on her most recent episode (though, oh, imagine how Jon Stewart might take him to task as only a member of the Tribe can). So now, we can only hope that with the release of this video Stephen Colbert’s conservative alter-ego (who then stuck around for an additional segment) will return again and again for the next several months, like a comedy Golem, called out to serve the people in our time of need.

Stewart should also come back in a more substantial way. Remember when Trump announced his candidacy, shortly before Stewart was scheduled to retire from The Daily Show? Stewart joked that the news was so absurd that he was tempted to stay. Even he couldn’t imagine then how much more surreal the campaign season would become.

Colbert teased more appearances of Stewart on his show this week, and we’ll see what that looks like. It won’t be like having him back at his old desk, but maybe he can supply us a little more of his unique, Jewish style of catharsis.