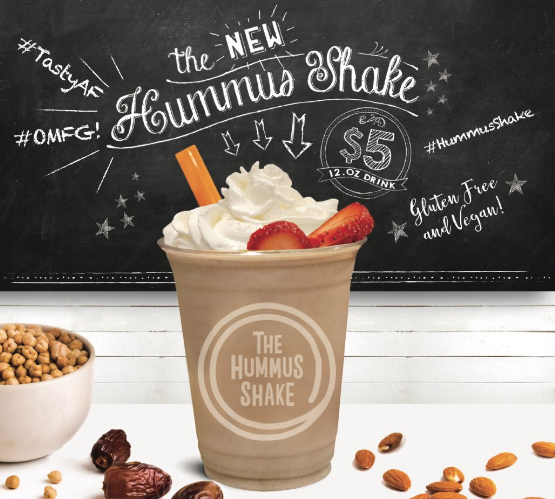 Well, it seems that it’s not the latter.

It would be easy to dismiss the shake as disgusting and write it off in righteous indignation, but they’re not bad. Original, chocolate, butter pecan, strawberry— they’re all reasonably tasty (I didn’t sample the fifth flavor, pistachio). That said, none of them taste like hummus. In addition to chickpeas, the shake’s base contains tahini, frozen bananas, dates, almond milk, and a little bit of vanilla and cinnamon. In the “original” shake, the dates and bananas overpower the chickpeas. But between those three substantial ingredients, the shake is pretty thick, and you really need to go at the thing with a straw.

The drinks also very, very sweet— especially the flavored ones. The strawberry shake tastes like pink Nesquik, and the chocolate has little clumps of cocoa powder floating around. The butter pecan is like drinking a cookie—you get the idea. If you don’t have a sweet tooth, you might find these shakes an abomination after all.

But if you’re looking for a vegan milkshake, you could do worse, and pricier; the shake is a reasonable $5 for New York City. (If you keep strictly kosher, sorry— Hummus & Pita Co. doesn’t have a hechsher.)

In conclusion, the bad news is that nothing is sacred, but the good news is that nothing is sacred! If you love hummus, the good stuff lives on, and this isn’t likely to be a chick pea revolution, but a quirk of a city with a lot of hummus products to go around. (Pro-tip, do not order the “choomoos” shake. Just pretend you can’t pronounce it properly like everybody else, including store employees.)

I’ll still never accept the rainbow bagel or funfetti cream cheese, though. That’s a hill to die on.