To start us off: What makes alcohol kosher for the holiday? Read More

To get right to the recipes, click here, here, and here.

Now that Purim has come and gone, it’s time to talk about Passover! Aren’t we all ready for 8 days of over-priced, over-processed food, and awkwardly explaining to co-workers why we can’t partake in Margie’s birthday cake? No? But come on, Passover brings us two of the best things in Jewish holidays:

But there seems to be a stigma on kosher for Passover alcohol. The holiday is associated with overly sweet wines like Malaga, Manishevitz, and Barternura Moscato D’asti, with the strange perception that all good alcohol is grain-based and therefore forbidden.

But Jewish holidays should be merry-making, and I, for one, am going to make merry. In a carboy.

Making Your Own Kosher for Passover Booze 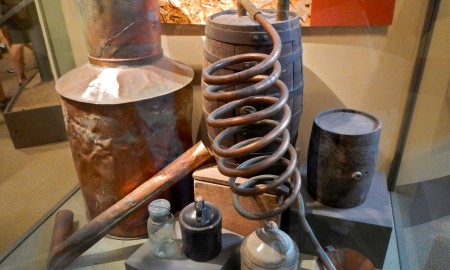 Many home-brewers have only delved into making beer, but, aside from requiring a lot of equipment, it’s also by-definition not Kosher for Passover. Passover law strictly prohibits almost all grains that would be used to make beer: wheat, barley, spelt, oats, and rye, as well as kitniyot like corn for Ashkenazim. But luckily, beer is not the only delicious alcoholic beverage you can make in your own home. And these are much, much easier. Any of these below recipes will take you maybe an hour, plus another 30 minutes for bottling a few weeks later.

Alcoholic beverages are made when sugars meet yeast. The yeast eats the sugars and turns it into OH, or alcohol. This means that anything containing sugar or starch can be fermented into alcohol – or you can add sugar to a drink to ferment it.

The recipes in this series are starter suggestions, but you can really make booze from anything that has sugar, honey, syrup, or fruit. (This means real sugars –stevia, xylatol, sucralose and aspartame will not convert). A lot of this information comes from my friend and radio show co-host Mary Izett, whose book Speed Brewing is entirely about quick alcoholic beverages.

Fair warning, not everything that contains sugar should be fermented. While rum is distilled from fermented molasses, I would not suggest just fermenting molasses, because it tastes terrible. Do some research before trying something new.

For everything below, you will need the following equipment that you can pick up from your local brew-shop or online: Really, that’s it. You can also pick up some star iodine, because cleanliness is key, but in a pinch, you can use some isopropyl alcohol, (very!) watered-down bleach, or potato vodka. The star iodine is like 3 bucks, just get it. You’re going to clean all your equipment with an iodine solution or cleaner, washing out the inside and outside of the carboy, and then leave the airlock/bung to soak in the mixture. While there are a hundred yeasts for beer and wine, for everything below, we’re going to be using champagne yeast. You can use probably a quarter of the packet per gallon of booze, then put the rest away for later or use it on a different recipe. Champagne yeast is crazy active and will ferment everything within two weeks.

YOU: “But isn’t yeast forbidden on Passover?”

No. If yeast was forbidden on Passover, you wouldn’t be able to have wine at all. Yeast or leavening agent is forbidden when combined with the aforementioned grains. Without the grains, you are technically allowed to eat it straight (though I wouldn’t recommend it).

There is but one specifically kosher for passover yeast and you must buy it in bulk.

However, Red Star is the brand that I use. Their yeast is kosher, there is nothing in it that makes it not KFP, but most of the stuff in the stores does not have the KFP certification. Many Rabbis say that yeast that is used for wine production is kosher for Passover by nature, and I have confidence in yeast-strain labs to keep their equipment clean from cross-contamination. Obviously, it’s up to you.

With all of that said, shall we get started?

Editor’s Note: Stay tuned this week for a piece each day about kosher-for-Passover drinking, including recipes that you can ferment in your own home. Enjoy responsibly!