Indulge in nostalgia and a huge meal at the same time! Read More

My friend Kati hosted a special Disney-themed Shabbat dinner, and now everyone else should, too. What makes a Disney dinner especially perfect for Shabbat?  First, have you ever seen a Challah? 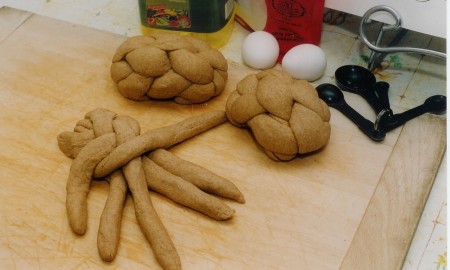 Boom, right off the bat you have a food that’s both Jewish and a shout-out to Tangled.  Throw on some flowers, and it’ll look just like Rapunzel during “I See the Light.” What else did Kati serve? Can you name all the references? In no particular order, there is:

Not pictured from the evening is zaatar for some Aladdin-style Middle Eastern cuisine, and a veggie selection of carrots (to shout out Rabbit in Winnie-the-Pooh) and broccoli (dreaded in Inside-Out), to dip in hummus, which Kati insists looks like the porridge from Beauty and the Beast.  A guest also brought salad with fruit forming the shape of Minnie Mouse.

Other ideas include kugel made in this overpriced Mickey-shaped casserole dish, a homemade gefilte fish with lots of Flounder to freak out fans of The Little Mermaid, and for dessert, don’t those leaf cookies from your old synagogue kiddush remind you of Pocahontas’s colorful, language-barrier-breaking, swirling nature-force?

Clearly, the only limits are your imagination, just like Walt Disney would have wanted had he known you were throwing a Shabbat dinner based on his company’s films.

Tagged with: A cool way to bring in Shabbat with people your own age. , Disney , Shabbat , Shabbat dinner , themed shabbat dinners