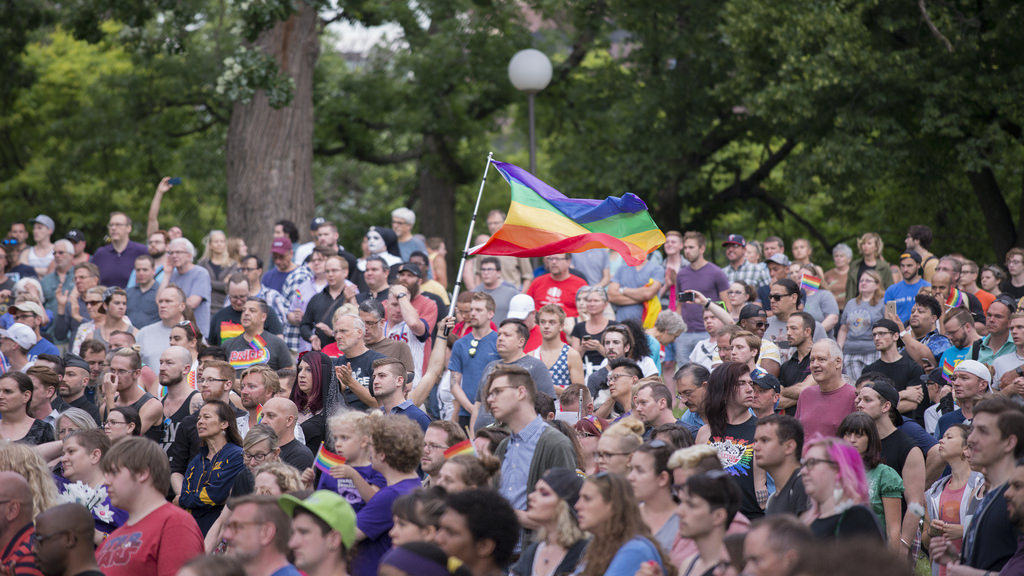 By now, everyone knows about the atrocity that occurred over the weekend, when a gunman attacked a gay night club in Orlando, resulting in the most deadly mass shooting in U.S. history. This event coincided with the holiday of Shavuot, a time when many observant Jews don’t use electricity. As a result, many observant Jews didn’t even learn about the tragedy until Monday night, when Shavuot had ended. And so, Jewish communities are on an awful sort of delay in learning about the tragedy and processing it, though some organizations have already issued responses.

While diverse Jewish leaders from around the world have condemned the attacks, what’s important right now is to listen to LGBTQ voices, so here are a few groups that have spoken out about this weekend:

Keshet, an organization advocating LGBTQ+ inclusion in Jewish life and spaces, issued a statement on their website. In part, it reads:

“It is sickening that the deadliest mass shooting in American history targeted LGBTQ people during Pride month. When the shooter opened fire, many Jews were observing the holiday of Shavuot, which commemorates when the Jewish people stood together at Mt. Sinai. So, too, we stand together in solidarity with the people of Orlando and with LGBTQ people and allies everywhere.”

JQ International, which has a similar mission and offers various types of support for LGBTQ Jews, said on Facebook of their appearance at this weekend’s LA Pride Parade:

“As we walked today with our family, friends, and community, we mourned for the 100s of those who were killed, injured, and traumatized in the‪#‎OrlandoShooting‬.

“As we celebrated our pride for being LGBTQ, we learned about the heavily armed man arrested in Santa Monica on his way to the LA Pride Parade.

“For years our community has survived this type of blatant homophobia and we have continued to thrive. We will continue to build and strengthen our community.”

Congregation Beit Simchat Torah, an LGBTQ synagogue in New York, has been active since the shooting, including attending a vigil at the Stonewall Inn. On Facebook, they said:

“Blessed be God, whose ability to judge truth and to understand such tragedies surpasses our own.

“May the injured and traumatized find healing, may the bereaved find comfort, and may the souls of those murdered be bound up in the bonds of life.”

The World Congress of GLBT Jews, another advocacy organization, stated:

“After targeting Jews in Paris in the Hypercacher terror attack, the vibrant nightlife of Paris last November and Tel Aviv just last week, blind terror is targeting once again what it hates the most: diversity and cosmopolitanism. Recent months have also seen attacks in Turkey, Tunisia, and Mali, societies that have been victimized by religious extremism.

“After the shock, we at the World Congress of GLBT Jews are more determined than ever to fight for a liberal an open society where everyone can live freely, whatever their origins, beliefs, gender identity, or sexual orientation. While we gather to celebrate LGBT Pride month around the world, we pause to mourn the victims of these senseless and obscene terror attacks. We strongly condemn these dark forces that misrepresent what Islam really is and that attempt to create chaos in our democratic societies. We will never let terror win.”

“Wishing everyone Shalom aka Peace

“‘Jewish LGBT Community in Orlando Florida’ sends our prayers of comfort and love to those affected by the tragedy at Pulse Nightclub in Orlando on the morning of June 12, 2016.

“To the dead, the injured, the survivors…. our hearts are with you.”

Image: A vigil in the aftermath of the shooting. Credit Fibonacci Blue via Flickr