Pepe is Now a Symbol of Hate Speech, Because We Can’t Have Anything 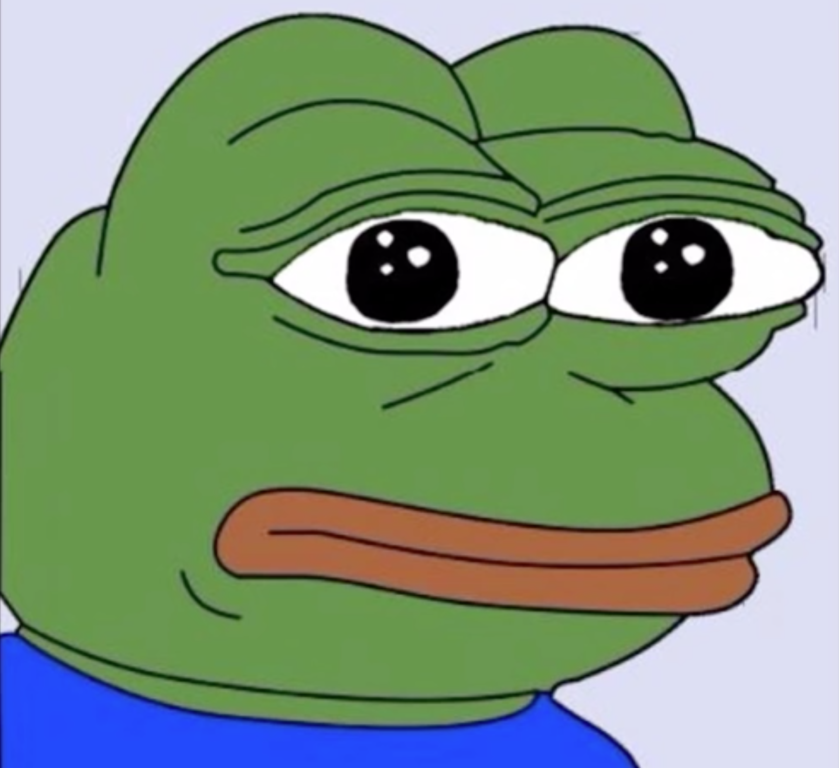 The face of HATRED.

In a sentence that I cannot believe I am writing, the Anti-Defamation League has added Pepe the Frog to its hate symbol database, because of his proliferation of use in alt-right Internet circles. I also cannot believe that real news sites have to explain how a stupid picture of a frog is used as versatile Internet commentary, and are describing its origins the same way you would approach a chapter of art history.

But, fine. If you must know, and haven’t visited the Hillary Clinton website’s explanation (yes, her campaign is taking this seriously, too), Pepe dates back about ten years. He’s an illustrated frog, originally used in an intentionally crude comic. He rose through the ranks of Internet popularity through the likes of 4chan and Gaia Online, often with his facial expression as a stand-in for the user’s feelings, of, say, sadness, or smugness. Recently, he has been appearing often in the corners of the Internet’s associated with extreme right-wing racists. This has included everything, like Photoshop of Pepe as Hitler, or a skinhead, or lately, as Donald Trump, say, banning Mexican immigrants. Some examples are explicit or violent, but they always feature that same humanoid frog with the stupid face.

And now, we have granted the same seriousness to Twitter basement teens that we have to synagogues defaced with swastikas and violent attacks on Jews.

Really, ADL, do you have nothing better to do? With this election bringing bigotry of all kinds out of the woodwork, you’re going to condemn the use of a poorly illustrated amphibian? While there is certainly a need for speaking out against bigotry, reaching for low-rent nonsense like this begs the question, have you never heard the Internet saying, “Don’t feed the trolls?”

It’s not even that Pepe is a good meme. He is of the sort of dankness that makes it impossible for anyone not from the depths of the Internet to appreciate. He’s supposed to be funny because he’s weird, crudely drawn, and vague enough that he’s usable for any situation. He’s used by leftists too, including as a mocking response to bigotry. Mostly, he’s just used for absolute nonsense, as much a mockery of “relatable” Internet memes as he is used in earnest. He’s so ubiquitous that he in fact means nothing.

Creators of memes are the deadest kinds of authors, but for what its worth, Pepe’s papa is against the alt-right’s co-option of the frog, and is voting Democrat in November.

God, what has 2016 done to us? This isn’t the first example of elevating adolescent virtual whining and mashing together of cultural tropes to a point far beyond what’s appropriate. The Forward published an article back in June trying to analyze Neon Genesis Evangelion in context of Neo-Nazi twitter trolls. With my own two eyes I had to read about Asuka and Shinji on a Jewish news website, and not as graffiti in a middle school bathroom stall where that discussion belongs.

Hurt, angry, or just confused, Journalists, non-Internet addicts, and, well, adults, are making this out to be deeper than the racists intend.  You know why? Because bigots are not capable of deep thought. The alt-right’s latching onto the milquetoast Internet humor that is Pepe is ample evidence of that. You know what? Fine. HERE is a Pepe that sums up this whole mishegas.

ADL, if you’re trying to stay relevant, this is not the way to do it. Get a better Tumblr. Make some memes, yourself. Give out sunglasses that say, “Throwing SHADE on anti-Semitism” on the sides. You can have that idea for free. You’re welcome.

You can’t declare the color red a symbol of hate, despite its presence on the Nazi flag. You can’t decide the number 14 has been used too many times by racists (it actually is a neo-Nazi shibboleth, and is also on the ADL’s list). As much as some of us would like to be rid of him for good, Pepe belongs to everybody.

You know what? Jewcy hereby declares Pepe not inexorably linked with anti-Semitism. You are all free to use him to express your general disappointments, frustrations, and struggles of your daily life. Or just Photoshop him onto Shrek’s body; we don’t care.

In any case, you can pick your Jewish authority, the ADL, or us.