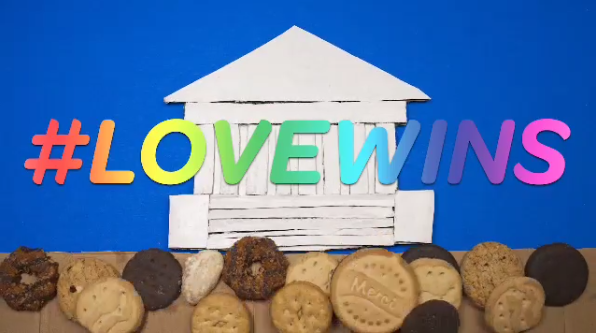 Are you a girl who is interested in building friendships with other girls who are not Muslims? Would you like to learn new skills, but not with Jews? Are you against reproductive, gay, and transgender rights? Have your parents examined their consciences, and determined that purchasing Girl Scout cookies negates the values of the Gospel? Then the American Heritage Girls (sic!) are the group for you! In joining, you can personally participate, with the help of well-meaning and irrevocably prejudiced adult mentors, in turning back the clock on human rights, and in undermining an over one hundred year old organization historically committed to empowering girls and women.

The media has covered the recent decision by the archdiocese of Kansas City to definitively cut ties with the Girl Scouts. While the Catholic Church has long been a major sponsor of scouting troops, their hierarchy has more recently stated their aggressive opposition to the Girl Scouts U.S.A.

In 2016 the St. Louis archdiocese took the more tentative step of discouraging Catholics from participation in Girl Scouting, even suggesting that they refrain from buying the delicious cookies which support secular humanist values. An FAQ section on the St. Louis archdiocese website explains concisely the root of the problem: Girl Scouts U.S.A. is affiliated with WAGGGS, the World Association of Girl Guides and Girl Scouts, an internationalist group with border-transcending powers to advance its agenda, including gay and transgender rights, sex education, and access to birth control.

Lest you misunderstand the mission of this global conspiracy, the St. Louis website explains it to you: “Once again, we see ‘reproductive’ as code language; these groups are really advocating for access to abortion and birth control.” The male hierarchy of the Catholic Church has explained to its members that the scary code word “reproductive” must be handled in quotes.

If you were not scared off Girl Scouting by this point, the website “reproduces” (sorry!) the above Instagram image (originally a gif) which GSUSA posted after the Supreme Court upheld marriage equality: the phrase “Love Wins” in multicolored letters above a sea of dancing cookies.

Yet the most disturbing attribute of Girl Scouting to some of the Church hierarchy is not sex without the possibility of reproduction, but rather encouraging girls to emulate strong role models. Both the St. Louis and Kansas City archdioceses single out two women as particularly antithetical to Catholic values: Betty Friedan and Gloria Steinem. These Jewish feminist leaders embody everything which the Church views as destructive: female social and economic independence, reproductive rights, and international advocacy on behalf of women’s and human rights.

So what’s a Catholic Girl Scout to do?  To be clear, any religious group has a perfect right to develop its own youth program, strictly dedicated to advancing specific beliefs and principles. Yet Catholic participation in GSUSA had always been predicated on the special character of Girl Scouting as a movement which is flexible in accommodating each girl’s faith tradition, as well as in providing opportunities for girls of different religions to celebrate what they share in common. The Girl Scouts have even designed religious recognitions, pins which girls may earn for dedication to their own traditions: Jewish, Muslim, Buddhist, Hindu, many different Protestant denominations, and Roman Catholic.

However, this encouragement of religious diversity no longer seems to meet the needs of the Catholic Church, which has suggested as an alternative organization the dishonestly named American Heritage Girls. Unlike GSUSA, an inclusive organization which has, since 1993, allowed Girl Scouts to substitute an alternative name, phrase, or idea for service to God in their official pledge, the AHG, around since 1995, is explicitly Christian. Its “Statement of Faith” demands belief in a triune God (the three in one version not shared by Jews, Muslims, and other faiths), and also asks girls to pledge to “reserve sexual activity to the sanctity of marriage,” defined as, you guessed it, “between a man and a woman.” (It is significant that a program allegedly appalled by the sinister values of a secular society asks young girls to explicitly address sexuality in a way which is completely outside of the scope of traditional Girl Scouting.)

There are many disturbing aspects of this alternative to Girl Scouts U.S.A. Founded in 1912 by Juliette Gordon Low, Girl Scouting was created as an affirmation of the ability of girls and women to participate in all spheres along with men: technology, outdoor activities, scholarship, culture, arts. Perhaps the most outrageous component of the American Heritage Girls is their appropriation of role models for their “Level Awards.” This attempt to co-opt American icons as part of an indoctrination program in anti-American values includes the Sacagewea, Lewis and Clark (they’re not even girls!), and, perhaps most reprehensibly, Harriet Tubman awards. In an alternative version of “American heritage,” the courageous Native American guide confronting U.S. expansionism, and the soldier of abolitionism and the Underground Railroad, are models of idealized “purity” and adherence to retrograde values which limit the choices of women. (Sacagewea was born into a Native American faith tradition; it is unclear whether her “marriage” as an adolescent to Toussaint Charbonneau promoted her belief in a triune God.)

If you are wavering between GSUSA and the AHG, perhaps it is time to buy some cookies, and enjoy them while reading or re-reading the Girl Scout Law:

I will do my best to be    honest and fair,    friendly and helpful,    considerate and caring,     courageous and strong, and    responsible for what I say and do, and to      respect myself and others,     respect authority,    use resources wisely,    make the world a better place, and     be a sister to every Girl Scout.