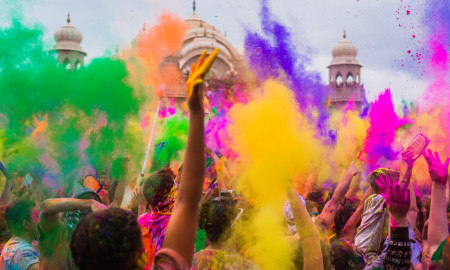 Costumes! Color! Food! Bonfires! Storytelling! Water Fights! 2016 is the best year ever because of the exact intersection of Purim and Holi.

Two groups of victims of the American myth of the “model minority,” Jews and South Asians, both get to let loose on festivals that are, well, festive. This year, both celebrations begin tonight, with the Purim Megillah reading, and with Holika Dahan, a bonfire the night before Holi proper.

Holi is an originally Hindu celebration celebrated by diverse groups in India and Nepal, as well as expatriate communities. While it’s diverse in observance worldwide, its origins involve celebrating the harvest, worship of Krishna, and a story about a demon named Holika who dies to save her nephew, symbolizing the victory of good over evil.

Holi celebrations are perhaps most famous outside of Asia as a “color carnival.” Celebrants throw color dyes as powder, and then use water guns and balloons to activate the dyes.

While it’s often a forced exercise to compare two completely different religious traditions, Holi and Purim both are absolutely joyous, even as holidays go (and in some places, Holi is also a holiday of love). Sure, Holi and Purim both involve music and delicious treats (like the best holidays), but what’s more, they both involve upsetting social order in the name of, simply, fun!

Purim is a chance for Jews to leave their expected roles behind. Orthodox men, for example, may cross-dress, and the status quo is, if briefly, in disarray. In Holi, everyone is equally invited to celebrate, or become a target in a water fight, regardless of age, class, gender, caste, you name it.

(Another commonality is intoxication; Purim is an alcohol-imbued holiday, and Holi is often celebrated with bhang, an edible cannabis.)

So happy Purim if you’re Jewish, Holi if you’re Indian, and both if you’re both!