At a Rosh Chodesh retreat, something both new and familiar… Read More 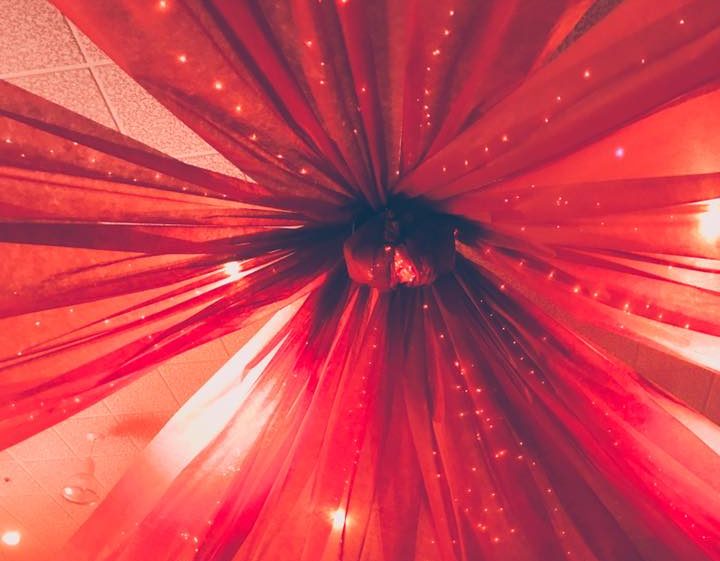 “Judy Lansky likes ‘At the Well.’” This information didn’t strike me as particularly significant as I read it on Facebook a few weeks ago, but I “liked” along.

Back then I knew little of Rosh Chodesh, the new Jewish month and its significance to women. I wasn’t aware of Timbrel, At the Well’s upcoming inaugural retreat. And I knew nothing of the glorious red tent I’d find myself in, full of meditation cushions, and candles, and comprising the entire space of the Jubilee room of a retreat center just outside Baltimore.

I received an invitation to attend just after Thanksgiving, the Instagram post reading, “We’re planting seeds and sparking a clear path forward at the intersection of physical health and spirituality, and we’re rooting it all in Jewish wisdom.” I appreciated the sentiment, the metaphor, and the mention of scholarships.

The logo was a series of circles evoking the cycle of the moon, combined to create a timbrel, the biblical word for a tambourine. I thought of Miriam, and the (Debbie Friedman version of) Mi Chamocha. Later I learned there was a third meaning hidden in the branding, a reference to At the Well’s mission to gather women around the world in well(ness) circles for self-care and spirituality.

It was the confluence of holistic self-care and religion that intrigued me. As did the promise of “explorations of Jewish notions of divine femininity” and “dance parties.” My Judaism and spirituality didn’t often cohabitate, and that gap left me feeling disconnected, unsure where to go for guidance. I craved unification. I reached out for more information, but didn’t pull the trigger to enroll.

The initial inspiration for At the Well, an organization founded just a few years ago, was to update Rosh Chodesh materials, and connect Jewish women to their bodies, and one another. From there it’s grown into an international community, addressing health, mental health, and holiness. Timbrel would take that to the next level, bringing together women from across the world to connect deeply over a three-day retreat, this new organization reviving ancient ritual.

I was intrigued, but unsure. I learned about the opportunity while traveling, and wanted desperately to reclaim my routine, and sleep in my own bed. On my way home to Michigan I stopped briefly in New York to visit my parents.

“We’re worried about you,” they told me. At 32 their parenting concerns hadn’t lessened as much as morphed. “You stop yourself from doing things,” my mother continued. “You’ve made a set of choices that have left you with increasingly limited options.” I listened, absorbing what I could, as they continued a somewhat one-sided conversation about my career, finances, partner, and life choices.

They couldn’t fully see me. But they could see my uncertainty — what I held beneath the surface but hadn’t realized I couldn’t hide.

That night I retreated. Closing the door of the guest bedroom, I pulled on my coziest pajamas, and cried out loud. I wanted anything but to experience the pain of feeling feelings, and questioning my life path, but now I looked at it head-on.

I felt a pull to go outside into the dark night. In bare feet, wearing only snowflake pajamas, I took three deep breaths as I raised my face and arms to the moon.

The moon. Timbrel. My mother’s words played in my head. It came to me like a deep knowing: I had to go. The origination of the message was unclear, but I understood it, and obeyed. I signed up for the retreat mere hours before registration closed.

That’s how I found myself in a room full of women, beneath the tent. Lights twinkled from above in swathes of red fabric, mimicking the glow of starlight. My heart skipped a beat when I first saw it — the recognition of something new, yet uncannily familiar. I sat on the cushions, my hips aching but my heart happy. On Friday, just a few hours before Shabbat and the fourth night of Chanukah, I settled in for the weekend, and awaited a miracle.

I knew no one attending, and little of what to expect. The founder introduced herself. Sarah— Sarah Waxman. Then another Sarah emceed, her schtick light and funny and warm. They both had traveled from the West Coast but quickly made this space feel like home, joined by women from around the world. Another Sarah, this one from DC, sat beside me on the plush rug.

There were so many of us, almost eighty in total, interested in an embodied, progressive, present experience of our Judaism. Six Sarahs all told, as well as multiple Hannahs, and Rachels, and Miriams. All of us our own people, as well as one another’s people. All of us individuals, and connecting in a long line of matriarchs harkening back to the very first: Sarah.

Sarah (Waxman) shared the creation story of this community for women. She talked about our communal disconnection from the planet, and from our bodies. She spoke of modern questions with ancient answers. Of mikvahs, moon cycles, and menstruation. Of rabbis, Rosh Chodesh, and red tents, and of vulvas, and orgasms, and well circles.

She referenced the moon and the water, inextricably linked. The moon controlling the tides and cycles. The water serving as a life force and meeting space. Both bringing all of us together. The weekend continued with workshops, prayer in meditation and movement, and communal rest. That night, after Havdalah, the dark room brightened as we lit candles for Hanukkah. A guitar began to strum, and the group broke into song. Dancers erupted from the crowd, first in pairs, then circles, then concentric circles moving in opposite directions.

“And the women dancing with their timbrels followed Miriam as she sang her song…
The voices rose, and the floors shook. The candles flickered, but remained lit.
“…Miriam and the women danced, and danced the whole night long.”

I could barely sing, barely move, barely breathe. A sensation welled up so strongly in my body I could have sobbed. Something latent was activated within me, and I knew I’d opened a door, and an opportunity. This singular moment was thousands of years in the making.

In a sea of Sarahs I awakened. Old parts, and new parts, and pieces just being realized and coming into being. “Sarahs start shit,” I spoke aloud to the founder, thinking back to the original biblical babe. “Yes,” she smiled back at me. “In tents.” I was being called to serve as a leader.

The retreat has ended, but my awakening has just begun. I come from a long line of Sarahs, have a new community of them, and get to explore and express what it means to simply be me. In writing, in speaking, in tracking my cycle, and in dance moves. In song, conversation, well circles, and being part of the longest-running book club out there. As a daughter, a therapist, a woman, and a Jew. I’m reminded that to sense the deepest messages within us sometimes we need a mirror to show us what we cannot see, like the moon’s reflection on the water.

I rediscovered myself during a weekend where no one knew me, and everyone had my name. And by doing so, I found a new path to take. One that goes forward and backward – to the future of Jewish femininity and spirituality, and to the past in an unwavering line of strong-willed and wild women.

Tagged with: At the Well , Feminism , Spirituality , Timbrel