The Struggle Continues: Being a Jewish Teen in 2016

One High Schooler still faces daily discrimination, and it can be exhausting. Read More 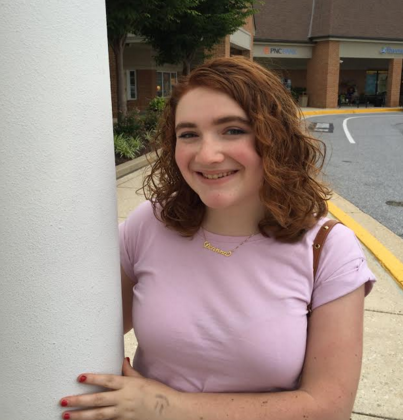 In that picture, you see a 16-year-old girl. She has frizzy, curly, reddish hair. Her eyebrows are thick and dark, and her nose is large. She enjoys reading and writing, and has dreams of working in publishing and live in New York City. She will get there someday; but first, she has to finish high school.

High school is rough. Whoever said that those are the best four years of one’s life was either home schooled or a compulsive liar. High school is especially hard when you don’t fit in, when you’re a minority.

My name is Deanna Schwartz. I am a proud Jew. I attend a high school in Howard County, Maryland where the vast majority of my peers are Christian. It may come as a surprise as to how few Jews there are in my city, considering areas not too far from me, like Baltimore and Potomac, have such high Jewish populations. Yet there are so few of us that I know most Jews in my county on a personal level, from one Jewish youth activity or another.

It’s 2016, so every day there’s a different trending topic celebrating diversity. This is good. Some may think that discrimination is a thing of the past. But, this is not true—especially for the Jews.

Oddly enough, my somewhat difficult experience growing up as a Jewish teen is fundamentally different from my parents’ experiences. My mom grew up in Philadelphia and South Jersey, where Ashkenazi culture is easily found. My dad, while primarily growing up in the same area as my brother and me, faced a completely different generation of tolerance and culture, since he was immersed in synagogue life and attending a heavily Jewish school.

My high school is a melting pot of socio-economic backgrounds and classes. You’ll see as many teenagers with “Bernie 2016” buttons on their backpacks as “Make America Great Again” hats. One area where we are not diverse? Religion.

It is easy to identify me as a Jew. I look like what people think of as appearing Jewish. I use Yiddish words as much as any good East Coast Jew should, and my last name is extremely, canonically Jewish. I wear sweatshirts from Jewish camps and am quick to correct someone if they wish me a “Merry Christmas.”

My parents have always made sure that my brother and I appreciate our differences for what they are. They pushed against the current of our Christian neighbors and classmates and enrolled us in Hebrew school. I had a Bat Mitzvah when I was 13, complete with a big party with all my friends and family. I participate in Jewish youth groups. My family has always attended or hosted Passover seders and lit candles for the eight nights every single year of Hanukkah.

Because of my proud Jewish identity, I have to deal with discrimination every day. It’s usually what the speakers think is subtle—people making Holocaust jokes, or saying I’m “cheap.” I once bent over to pick up a quarter that was on the floor in the cafeteria at school and heard someone mutter “filthy Jew” under their breath.

What did I do? What I often do— I pretended I didn’t hear it. Or sometimes I’ll laugh as if it’s funny. Or I correct people, but while hiding how much it actually hurts. I roll my eyes when they tell me that I’m going to Hell (both in jest, and in earnest; I once had a classmate ask me to leave the table during a meal so she could say grace. My presence as a Jew was too much for her to handle as she said her prayers to Jesus). I haven’t sought support from the school because I know nothing would change.

This is something that the Jewish kids in my school are used to— my closest friends are also Jewish and I have a twin brother, and I often hear other stories like mine. We grow up knowing that we are different. We are used to teachers assigning homework during Yom Kippur because it’s just a day off school to them, or seeing tweets from our classmates flippantly saying “thank you Jews for the day off!” We’re used to being assigned the role of “Jewish one” in friend groups. We’re used to holiday gift exchanges being called “Secret Santa” and feeling uncomfortable at Christmas parties.

One of the most frustrating facets of the teen Jewish experience in my area is the assumption that we are Christian. Everyone simply assumes that you are Christian. I’ll never forget when our warm-up question on a December day in fourth grade was “Are you excited to get your Christmas presents?” I was the only kid who put my magnet on the side of the board that said “No.” The teacher said to me, “Deanna, why are you so ungrateful?”

Moments like this are minimal, but they add up. Years and years of feeling that it’s wrong to be Jewish at one point made me start to resent my religion. I started to perpetuate the stereotypes and make the jokes myself. I screamed when it was time for Hebrew school. I experimented with makeup to make my nose appear smaller, and tried straighteners to get rid of that pesky curl that seemed so ugly to me. On my Bat Mitzvah, I had straightened hair. Something every Jew can agree on is that it’s comforting to be around other Jews. A usual haven for many Jewish kids, myself included, is summer camp. For six years, I attended a Jewish sleepaway camp, Camp Louise. Being surrounded by other Jewish girls my age in a safe and fun environment was absolutely incredible, and included Saturday night Havdalah and learning Israeli folk dances. I don’t attend Jewish sleepaway camp anymore, but it had a profound impact on me and my life overall. It’s something to hold onto, to remind me that my identity is something to love. I would not be the same person without it.

I’m at the beginning of the summer before my junior year of high school. This is an important summer. I’m starting to look at colleges (a good Hillel is a must!), learning how to drive, and developing all kinds of new forms of independence. I’ve been thinking about the future since before I knew what it really meant, and Judaism has always been a part of my future. I plan to raise my children as Jewish, and I hope to be able to teach them the lessons I’ve learned and will continue to learn. I dream of a day where Jews will be more accepted. It’s the same dream my ancestors have been dreaming for centuries. But if there’s anything that the Jewish people are, it’s persistent. We’ve been the subject of hate and violence more times than any other religious group, and we’ve pushed through. Judaism is and will always be a huge part of my life. It’s shaped my ethics, morals, and personality. I love my religion with all my heart and will never stop being an advocate for acceptance.