This Tu B’Shevat: Celebrating the Worms in My Kitchen

Discovering the joys of composting at home Read More 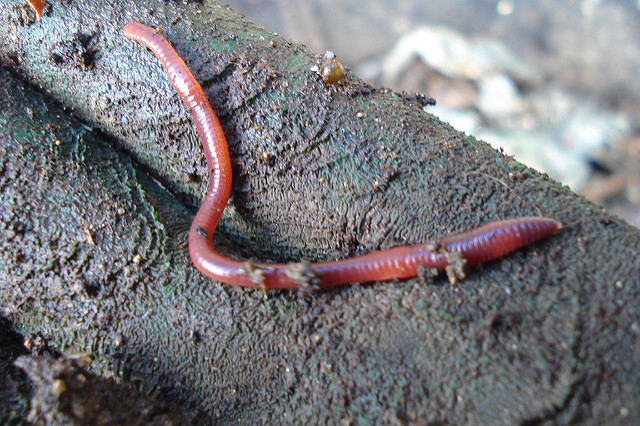 Tu B’Shevat is many things: Ancient tax festival, kabbalistic celebration of nature, communal birthday of all trees, and contemporarily: a sort of Jewish Earth Day, a call for conversations about sustainability and our duty to protect the natural world.

Borrowing a little bit from each tradition (except maybe the taxes part), I am celebrating the birthday of the several hundred worms that currently live in my pantry.

Yes, they’re there on purpose.

Since Sukkot, I’ve been composting right in the pantry of my kitchen. The plastic shelves take up fewer than ten cubic feet in space, but contain a tiny ecosystem of worms, the occasional invasive fruit fly, and an ever-growing pile of fresh compost.

I honestly don’t know why I decided to do this. I’ve gradually shifted to being more “green” over the years, but I’m far from a fanatic. Maybe it was my desire for pets— I’ve never had one of my own. Maybe I was tired of dropping off my food scraps a few blocks away during very limited hours; my neighborhood doesn’t have compost pickup, like some others in Brooklyn. Mostly, I just thought it seemed neat. I did the research, and the maintenance costs are minimal, as is the time-commitment.

I shouldn’t have been surprised by my friends’ range of disinterest to disgust, but I was.

“I’m getting compost worms!” I excitedly told one chum who’s so eco-conscious that she was once an Adamah Fellow— and that’s a Jewish farming/social justice program.

Uh oh. Had I bit off more than I could chew? Well, with many more mouths to feed now, I had lots of help chewing. With my husband’s full support (so long as I took primary responsibility), I went full-steam ahead, and received in the mail, about 500 “red wrigglers.”

The system is pretty simple: The worms live in a stack of special plastic bins with a bit of dirt and old newspaper (and that’s one thing less to recycle). When my husband or I produce raw waste— from egg shells to banana peels (things like meat are a no-no), we chop the food into smaller pieces and bury the food about an inch down in the mixture of the box, and go about our day. Over time, the old food disappears, and the worm castings (yep— poop, but it’s essentially rich soil) builds up in the stacked shelves/boxes. Where the magic happens.

Judaism has the concept of “bal tashchit,” of not being wasteful, going back to Biblical laws about not cutting down fruit trees during a war. Today, the phrase is more often used in conjunction with concepts like reducing, reusing, recycling. And food waste is a particularly frustrating need to address— nearly half of American food gets thrown out, when there are still people with not enough to eat. Furthermore, improperly discarded food can contribute to greenhouse gases, an extra kick in the pants for the issue. Much of the problem has to do with the relationship between commerce or industry and food, but individual households are also responsible for doing their part.

As for composting at home as opposed to outsourcing the job, cities like New York may have eyes bigger than their zero-waste stomachs; from finding spots for the raw food, to needing trucks to transport the goods, the logistics of how to reduce food waste create more challenges that doing-it-yourself can alleviate.

Well, fulfilling my responsibility is all well and good, but composting has also been amazing fun. It helps that I’m not squeamish about looking at, or even touching worms (though I rarely need to), but I love opening the bin and seeing the wrigglers living up to their name. I love seeing how quickly the food I leave disappears, and the rich, dark castings take their place. Sometimes the seeds that end up in the box manage to sprout, despite the lack of sunlight, and get to be several inches tall before they too are worm food, which is a cute reminder of mortality to have right under the spice shelf.

Plus, I can leave the worms alone for days, even weeks, and they’ll be fine. Name a pet that’s as low-maintenance.

I think also of the book of Jonah, when the single, God-sent worm eats the tree shielding the prophet overnight. Jonah decries the loss of the tree in a lesson about valuing all life, but I’ve come to see the worm as an industrious little hero. Maybe the Bible just doesn’t mention a soft pile of worm castings where the tree once stood, but if Jonah stopped to think, he could use the fresh soil to grow a new tree. (For what it’s worth, my worms aren’t interested in eating still-growing plants, and would not have treated Jonah that way. Good worms!)

But the most amazing result of this wormy journey has been subtle— a growing awareness of how much food scraps my household produces, and how, in ideal circumstances, they decompose and become part of the earth. It’s made me reconsider my meals in and out of my home, and where they came from, and where they’re going next.

I’m still not an eco-fanatic, but maybe I’m on my way.

Tu B’Shevat is also a strange holiday due to its timing; it’s hard to think about things growing when many Diasporic communities are still mired in mid-winter. But I’m committing to harvesting the worm castings and, when it’s warmer, filling a window box in my kitchen, just a few feet from where the worms do their work. I’ve never had a plant I didn’t kill, but I’ve been sustaining life for months now. I think I’m ready to try again. The rest I’ll drop off at a community garden, or offer to friends.

In the Torah, God commands humankind to take dominion of the earth, to rule over the other species that live there. Today, that passage is also seen as a call for responsibility of the world in our care. Well, I’ve captured the circle of life in a box, a tiny utopia for lots of little living things. I see to their needs, and in their tiny way, they’re seeing to mine.