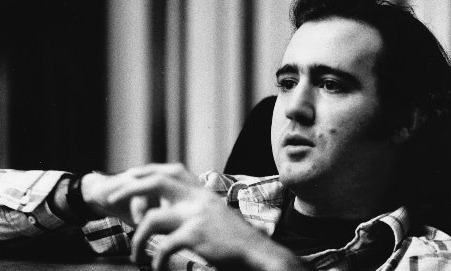 Twenty-nine years after his death, it seems Andy Kaufman may have pranked us from the grave.

A 24-year-old woman claiming to be the avant-garde comedian’s daughter took the stage at the Annual Andy Kaufman Awards at Gotham Comedy Club Monday, and told the audience that her father, long-rumored to have faked his own death as one of his characteristically elaborate hoaxes, is very much alive, reigniting the rumors.

Kaufman’s brother Michael addressed the audience saying he was not certain whether his brother was alive or dead. The Comic’s Comic reported from the event:

Michael Kaufman told the audience that while cleaning out Andy’s things after his death in 1984, he found among his many writings an essay about how Andy planned to fake his own death, his literal, figurative and spiritual leaps through meditation, and how he’d eventually reappear on Christmas Eve on 1999 at a particular restaurant that had served him a favored dish years earlier. When that date arrived, Michael said he ventured to the restaurant, asked for a table under one of Andy’s pseudonyms, and waited. He didn’t meet Andy that night, but said someone handed him an envelope, and in that envelope was a letter addressed to Michael from his brother. The letter purported that Andy wanted to go into hiding and live a normal life, that he’d met and fallen in love with a woman and had a daughter, and that he didn’t want Michael or anyone to say anything while their own father was still alive. Andy’s and Michael’s father died this summer. Michael said a young woman called him a month afterward to say that Andy indeed was alive, that he was watching the Andy Kaufman Awards from afar and loving the fact that so many comedians had been inspired by him. When Michael asked the Gotham audience if that young woman had showed up Monday night, a 24-year-old eventually stood up from the back of the room and sheepishly made her way onstage

One of the award finalists, Killy Dwyer, wrote on Facebook about how real it felt in the room that night:

As much as this seems like bullshit as I type it, it was as real as anything I’ve ever seen. There is video. It was chilling, upsetting and absolutely intriguing. I bawled my eyes out. The entire room was freaked out. It was, if nothing else, brilliant. and incredibly mindfuckng and AWESOME.

Of course, it didn’t take long for the internet to figure out that Ms. Kaufman was actually Alexandra Tatarsky, a 23-year-old New York City based actress, whose father is not Kaufman, but a doctor.

If you still aren’t sure that Kaufman is very dead, here is his death certificate.

In the words of a lost legend: “Tenk you veddy much.”