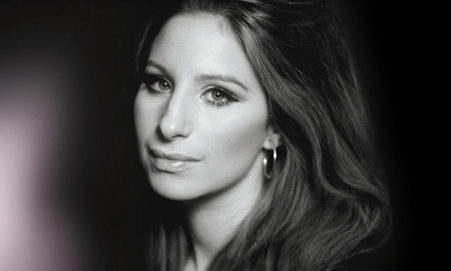 Legend is not a term to be thrown around lightly, but here it fits. Consider the laundry list: She’s won two Oscars, five Emmys, eight Grammys, and a Tony. Not to mention the Golden Globes, the Kennedy Center Honor, the American Film Institute Award, and the two Peabodys. She’s America’s best-selling female recording artist and the only woman in the top 10, and her album roster reads like the inventory at a jewelry store: 51 gold albums, 30 platinum albums, and 13 multiplatinum albums in the U.S. alone. And that’s just the music. Go Netflix her endearing Funny Girl, her super-romantic The Way We Were, and her historic Yentl—she was the first woman to write, direct, produce, and star in her own film. (And then there’s that little Fockers franchise, which owes a healthy portion of its laughs to her portrayal of a cringeworthy mother.) This year President Bill Clinton sang her praises at Lincoln Center’s Film Society Awards, she gave her first-ever concert in Israel, and she saw the doors open on the cutting-edge research center for heart disease that she funded. “As a young woman I wanted nothing more than to see my name in lights,” she says. “I couldn’t have guessed how much more satisfying it would be to see my name in stainless steel on the building at Cedars-Sinai hospital that says ‘The Barbra Streisand Women’s Heart Center.’

A nearly unattainable EGOT! Her own hospital wing! Meet the Fockers! But even with all that, Babs still keeps a sense of humor about her high-power celebrity status.

“It’s funny, I was always kind of lazy. I didn’t want this role; I didn’t want that role. Some I turned down because I was having a love affair! I’ve always liked working really hard and then doing nothing in particular. So, consequently, I didn’t overexpose myself; I guess I maintained a kind of mystery. I wasn’t ambitious.”

She’s one of the rare honest and relatable celebrities that audiences just want to be friends with. Like Jennifer Lawrence or Tina Fey before we had either. And, she never conformed.

“I didn’t do what people said: ‘Change your name, cap your teeth, change your clothes, cut your nose down.’ My nose was part of my heritage, and if I had talent to sing and to act, why wasn’t that enough?”

And finally, Glamour has left us with some words of wisdom, from Babs herself.

“One, find your passion. Find what you love to do,” she says. “Two, trust your instincts. Three, stay true to yourself—people respond to authenticity, and they can smell a phony. Four, don’t fear your self-doubt. Doubt can motivate you, so don’t be afraid of it. Confidence and doubt are at two ends of the scale, and you need both. They balance each other out.”

And five? “Take risks. Don’t stand on the sidelines. Get involved. It’s your life. It’s your country. It’s your world.”

Previous: Barbra Streisand ‘Flattered’ By the Duck Sauce Song Named After Her