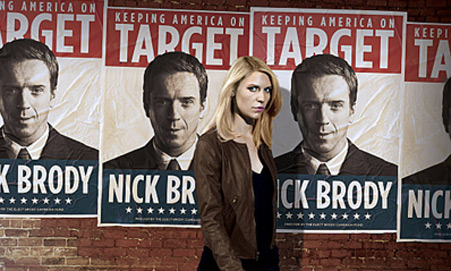 All moments of uncertainty and romantically naïve implausibility that Homeland fans have endured throughout this season paid off in last night’s episode, “Big Man in Tehran.” There were still inconsistencies in the episode, but the last few minutes could have redeemed even the grossest of poor writing decisions (like, even if the first 40 minutes included only a dramatic reading of Dana Brody’s (Morgan Saylor) diary, it STILL would have been an amazing episode).

To catch up: Brody (Damian Lewis) and Javadi (Shaun Toub) are in Tehran to execute the CIA’s plan to put Javadi into high power in Iran. Brody is to use his status as an international figure of infamy to claim that he wants asylum in Iran, which is reasonable, as everyone else in the world wants to kill him. Still, Iranian officials won’t be sure of him, so Brody, who will be subject to extensive questioning, is to get close enough to Javadi’s boss, Akbari (Houshang Touzie), to kill him, which would promote Javadi to Akbari’s position. Since the CIA found incriminating stuff on Javadi that, if publicized, would ruin his standing in Iran, Javadi is America’s pawn to play however it wants. So, once Javadi is in power, the United States would be relatively safe from its former enemy. The problem with this plan is all the moving parts that Saul (Mandy Patinkin), the brains behind the far-fetched operation, acknowledges. But Saul doesn’t care—his time as Interim CIA Director is dwindling, and he only has his starry-eyed optimism and selfish ruthlessness to rely upon, not only to restore his professional reputation, but his sense of self as well.

Carrie (Claire Danes) is needlessly in Tehran, sporting a comically unconvincing disguise of a hijab and brown hair (the only convincing disguise for Crazy Carrie would be enough Botox to keep that brow un-furrowed and chin un-quivered). While she’s acting like the reason for her presence is to keep tabs on the status of the operation, it’s obvious that she’s just drawn to her baby daddy even in the most illogically dangerous scenarios. But she’s not conscious of her motivations—while on the phone with Saul, Carrie’s rendered speechless at the sight of her baby bump in a window reflection.

When Saul’s crazy plan unsurprisingly didn’t pan out, it appeared that Brody gave up and truly did just want to seek asylum in Iran. After Javadi suggests that Akbari meet Brody in person so the Iranian official could decide if Brody should be granted asylum in Iran, Akbari and Brody meet in a public arena, at opposite sides of an open square, like an old Western film. Brody, armed with a syringe of poison, moves close to Akbari, who flees the scene when Brody gets close. Iranian officials bring Brody to a house to meet with Abu Nazir’s widow, who was probably instructed by Akbari to feel out whether Brody is genuine about seeking asylum. The two have a heart to heart about how since life has been so hard for both of them, staying faithful has been challenging.

After his chat with Ms. Nazir, everyone believes that Brody just wants peaceful refuge in Iran—and his shtick worked too well. Back in America, the president ordered Brody to be killed, identifying him as a severe liability that could publicize Javadi as a double agent, which would ruin everything. Saul doesn’t tell Carrie that America is going to kill Brody, but he begs her to get out of Tehran. Naturally, she reads between the lines and disobeys orders. She calls Brody and begs him to run away with her (to preserve her future family), and he refuses. Quickly, the American agents are on Brody’s tail, so he throws the burner phone into the bushes and he runs straight to Akbari’s office to spill the beans about Javadi and the whole mission before America gets the chance to kill him. Right when it appears that the CIA was right to try and kill Brody, as he’s acting like the liability they feared he would become, he hits Akbari over the head with an ashtray and suffocates him with a pillow.

Brody did it! He’s a hero—it’s just like Rudy or Miracle! And Saul’s plan worked! It’s unclear how Brody will get out of Akbari’s office alive (with Akbari’s dead body at his feet, and having just called Carrie from the office phone—also, how did he memorize Carrie’s Iranian burner cell number? I can’t remember my sister’s cell). But Carrie will undoubtedly do something crazy and dangerous, putting herself and Brody and national security in danger, but, hey, she’s in love!