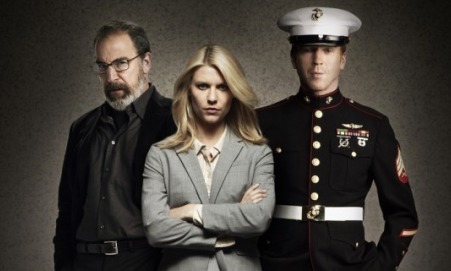 The craziest revelation in last night’s episode of Homeland, “Still Positive,” had nothing to do with terrorism or national security. The bomb dropped in this episode didn’t kill any civilians—it created one. Ladies and gentlemen, Carrie (Claire Danes) is PREGNANT.

Last week, Majid Javadi’s (Shaun Toub) minions violently kidnapped Carrie from her home in the middle of the night. This week, they bring her to Javadi, who administers half a polygraph test before she rips off the sensors and turns the tables on him. We know that there is some scandal with Javadi embezzling money through the Iranian soccer team, which makes him an enemy of his own state. But because completely understanding the entirety of this plotline requires remembering a platoon of names and details, it’s tough to identify and boil down what the actual problem is. Maybe it’s not actually that confusing, but I’d rather not worry about it and depend on the stares, silence, and eye bulging to convey intensity in lieu of actually following the plot.

Anyway, Carrie pulls the ol’ power-struggle switcheroo on Javadi, and he understands that he is the target of the CIA’s secret mission that Carrie and Saul (Mandy Patinkin) have been operating for months. He agrees to meet Carrie at a coffee shop later that afternoon, and she goes home to catch Saul up on what happened. We learn that Saul and Javadi worked together a number of years ago, when Javadi agreed to help Saul transport hostages from Iran to America, but he reneged and shot the hostages in the head. Saul retaliated by helping Javadi’s wife and grandson escape to America. So, after we learn all of this, and Carrie and Saul get off the phone, she goes to the bathroom to take a pregnancy test. When it’s positive, she blankly stares at it and puts it in a sink drawer with dozens of other positive tests—she’s been pregnant for a while. While we have to wait to learn answers to the crucial questions, like if Brody is the father, consider the absurdity of how much money was spent on a drawer full of pregnancy tests, and how much Carrie’s bathroom must smell like a litter box what with all of that stale pee living in her drawer.

When Carrie goes to the coffee shop to meet Javadi as planned, he deviates and goes to a residential neighborhood where—shocker!—his estranged wife and grandson reside. He immediately shoots his wife’s roommate and then moves on to brutally slaughter his wife with a jagged broken bottle. Carrie and spy colleague Quinn (Rupert Friend) get to the scene just in time to find Javadi red-handed amidst the bloodbath that the CIA will hardly be able to clean up in time to keep its secret mission from the FBI.

When Carrie and Quinn deliver a bloody Javadi to Saul for interrogation, a generally calm Saul is overcome by his years of anger toward Javadi. In every aspect of his life, Saul has been overrun. He was snubbed for the directorship of the CIA in favor of Senator Andrew Lockhart (Tracy Letts), who vocally disapproves of the way Saul ran the agency in the wake of the Langley bombing. His estranged wife, Mira (Sarita Choudhury) admitted to being in love with someone else. And he just made a mess of the secret operation he was running, which would have heroically brought justice after the Langley bombing that served as the precipice to his professional demise. So, when faced with his enemy of so many years, Saul finally got angry and punched Javadi in the face. He has nothing to lose.

Also crushed by the rock-bottom state of her life, Dana Brody (Morgan Saylor) is back from her romantically irresponsible road-trip runaway with psych-ward boyfriend Leo (Sam Underwood), but not for long. She changes her last name from Brody to her mother’s maiden name—but that’s not good enough. She actually runs away again, eventually with her mother Jessica’s (Morena Baccarin) blessing. Jessica knows she can’t control Dana anymore, so she must let go. She gives Dana a $300 prepaid credit card and sends her on her way. With luck, that’ll be that last we see of Dana and all of her melodrama, but more likely, she’ll end up back in Leo’s arms in rehab. Regardless, it’s doubtful anyone will really care.