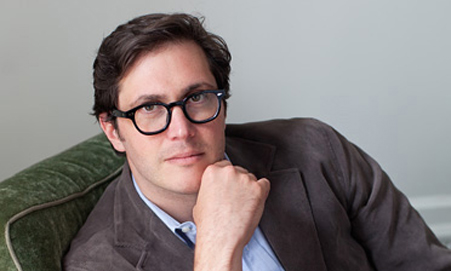 The New York Times shined its spotlight on novelist Austin Ratner, the Brooklyn-based Jewish writer whose first novel, The Jump Artist, won the $100,000 Rohr Prize for Jewish Literature. The article mostly focuses on Ratner’s connection to Brooklyn’s other Ratner (for another look at Ratner, Austin, check out Marc Tracy’s 2009 profile for Tablet), but it does include this descriptive flourish:

Mr. Ratner recently gave a reading for his latest novel, “In the Land of the Living,” at Book Court, a bookstore in Cobble Hill, Brooklyn, that drew a respectable crowd for a mid-list author reading from his sophomore effort. There were lots of Ratners (though no Bruce), some family friends and a few disaffected youth cadging free Champagne.

Mr. Ratner, who combines the boyish handsomeness of Clark Kent with the nebbishness of Woody Allen, stood at the rostrum. His glasses were thick; his hair neatly combed. His book, heavily annotated, lay open in front of him.

Ratner wrote an essay for us last month about his distinctly Jewish sense of humor, where he notably called the Internet “bullshit at the speed of light.” Here’s his take on the role of comedy, and comic relief, in Jewish culture.

Jewish comedy equals tragedy plus comedy in a hurry. That is, Jewish comedy takes place in the midst of tragedy and despite tragedy. I don’t mean theater of the absurd or any other form that treats existence itself as a sort of sick joke. (More than sick, I’d say it’s longwinded.) By Jewish comedy I mean joyous, meaningful human laughter pressed into service amidst sorrows and by sorrows, laughter engaged in subversive work upon sorrows to leaven and defy them.

Spotlight On: The Fat Jew, AKA Josh Ostrovsky