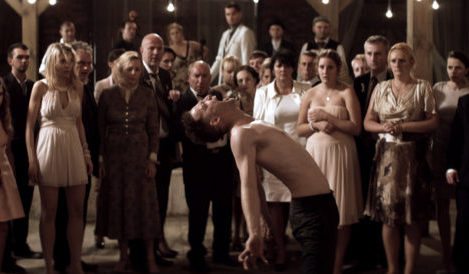 In Demon, ghosts refuse to rest, and those who cross them risk possession— Jewish style.

While tales of demons and vengeful spirits pervade Jewish folklore, it’s the notion of the dybbuk that’s ubiquitous, that the soul of a dead person may invade the body of the living, and won’t leave just because you ask them nicely. Now, the dybbuk takes its next turn onscreen in the Polish-Israeli film premiering in the United States after a year of the festival circuit.

The film, as you can see in the trailer, plays into certain well-worn horror tropes. A young couple is terribly in love. The man is excited to build a new summer home for his bride! And hey— maybe they should tear down that creepy barn on their property. From there, it eventually spirals, as you might expect, into chaos, to the couple’s raucous wedding party that takes a turn when the groom starts exhibiting, well, strange behavior.

Perhaps the most famous cultural representation of this folklore is the S. Ansky 1920 play, The Dybbuk, and its subsequent 1937 film adaptation. Demon clearly dips into Ansky’s well—setting the story at a wedding at all is a reference, but does the ghostly bride in the trailer look just a bit like Ansky’s tragic Leah?

The film’s stars include lauded Israeli actor Itay Tiran, perhaps best known for his roles in Beaufort and Lebanon. The film is set in Poland, and of course the Polish wedding-goers faced with literal demons of the country’s Jewish past is a chilling, intentional metaphor that modern Jewish audiences will certainly note.

Unfortunately, it bears mentioning that since the film’s completion, its director, Marcin Wrona, committed suicide. While it’s inappropriate to try to create meaning of the connection between onscreen events and behind-the-scenes tragedy (see: the Poltergeist “curse”), it’s certainly significant that this is his final film. So far, it’s been very well received.

The film opens in limited release in the U.S. on September 9th. In the meantime, you can watch the super-creepy trailer below: