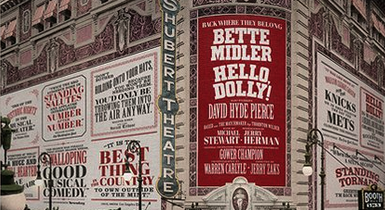 Surely you have been eagerly counting down the days until the Broadway revival of Hello Dolly begins performances (181). It’s starring Bette Midler, and you can stop right there before knowing anything else and know you need tickets.

(OK, OK, it also stars David Hyde Pierce, and its director is the great Jerry Zaks. The Jerry Herman-written musical tells the story of a meddling matchmaker who turns the town upside down at the turn of the twentieth century. It’s also worth noting that Midler hasn’t been in a Broadway musical since the 1960s.)

But yes, with half a year to go, you’re going to be able to make a purchase for so far into the future you’ll think you’re seeing Hamilton. The Divine Miss M herself bestowed us with this amazing tweet:

Wait, Saturday? It’s annoying that Shabbat observant Jews won’t be able to sit at their computers the second virtual box offices open for a Jewish musical starring a Jewish performer, but that’s Broadway for you.