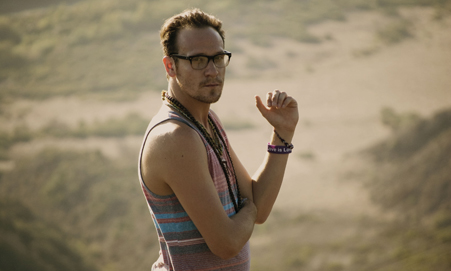 Meet Mikey Pauker, the Los Angeles-bred musician who’s making a name for himself, as he describes it, “breaking the boundaries of traditional Jewish music with his liturgically inspired, spiritual repertoire.”

Sound familiar? With Matisyahu beardless and struggling to find a new foothold in the music industry (and get into clubs), there certainly is room for a new young Jewish reggae upstart. Could it be Pauker? He’s working on his first full-length album with producer Diwon, who’s also worked with Matisyahu and Y-Love, so we’ll know the answer soon enough.

Here’s his new music video, “Hinei Mah Tov,” which shows the keffiyah-clad singer all over Venice Beach, playing his guitar and hanging out with a bunch of people in body paint. According to Artist Direct,

Pauker, who has been described as one of the most profound and trendsetting Jewish recording artists in the world, says Hinei Mah Tov is “a call for unity.” The title is derived from an ancient Psalm in which Mikey translates, “How great it is for brothers and sisters to hang out on this day!”