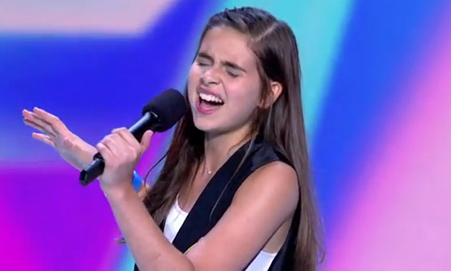 The breakout star of this season’s X Factor auditions is Carly Rose Sonenclar, a 13-year-old Westchester native. She wowed the crowd with her soulful rendition of Nina Simone’s “Feeling Good,” and earned a standing ovation and enthusiastic ‘yes’ votes from Britney Spears, Demi Lovato, L.A. Reid, and Simon Cowell. The notoriously picky Cowell even declared, “a star has just walked out on that stage.”

But Sonenclar, who is Jewish (Facebook has been kvelling over her since her appearance), is hardly an undiscovered talent—she starred as Young Cosette in Les Miserables on Broadway when she was seven years old. More recently, she played the lead in Wonderland on Broadway and was on PBS’ The Electric Company. Not too shabby for a 13-year-old!

Check out her X-Factor performance (spoiler alert: Britney calls her a “little diva”):

The eighth-grader is poised and articulate, and seems well-prepared for the spotlight. It may be early in the season, but Sonenclar definitely has a shot at winning the whole thing.

And look! She also knows this guy:

According to the countdown on her website, her next X Factor appearance is in nine days, three hours, and 45 minutes. Do you think she has what it takes to be the X Factor champ? Let us know in the comments!

Jewish Theatre on the Horizon