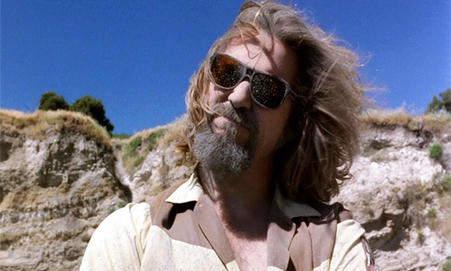 Director Jeff Feuerzeig met The Dude 12 years before The Big Lebowski. The Dude being Jeff Dowd, who actually was called that, and who inspired the Coen Brother’s cult hero in the 1998 film. Now, Feuerzeig has given The Dude his own movie: a documentary called The Dude

The Dude and I never did work together, but over the years we’d cross paths on the festival circuit, and it always warmed my heart that such a character, this true believer, was still carrying the torch for Independent film. When the Coen Brothers made The Big Lebowski in 1998, I sat in a darkened theater trying to reconcile the Dude I knew with the fictitious character Jeff Bridges was playing on screen — Jeff “The Dude” Lebowski — but I was not surprised in the least that the Coens found inspiration in the Dude. Jeff Dowd is a right of passage in the indie film world — baptism by the Dude — his spittle and good vibes setting you free to create a world of your own.

THE DUDE (Director’s Cut) from Jeff Feuerzeig on Vimeo.