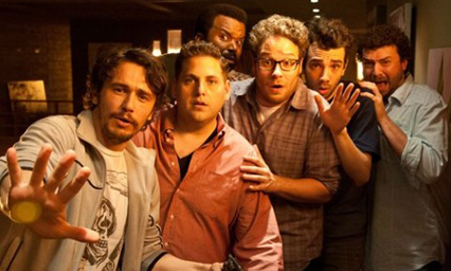 In what seems like the next logical step for the stoner comedy rat pack, Seth Rogen, Jonah Hill, and James Franco have dropped the whole playing characters charade and instead just play themselves in This Is the End, Rogen and Evan Goldberg’s bro-pocalypse comedy out next summer. It’s kind of perfect, though, since we get to see Danny McBride make fun of Seth Rogen for The Green Hornet and voice our collective uneasiness about the fact the Jonah Hill is now Academy Award nominee Jonah Hill.

The premise of the movie—something terrible happened last night, the details are hazy and drug-clouded, and now we’ve got to face the consequences—is hardly novel (though to their credit, they’ve added the whole world-is-ending thing), but these guys are funny enough that they can pull off the improv-heavy narrative. Plus, they seem like they’re really friends, which is pretty awesome. Anyone who is friends with Craig Robinson is a friend of mine.

It’s no Sephardic Judd, but let’s be real, nothing is.