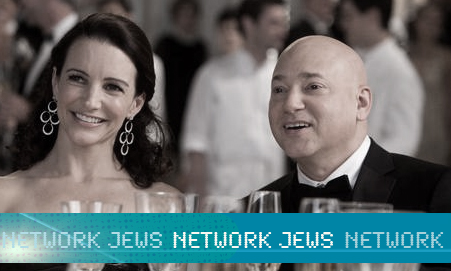 Despite taking place in New York City, which is, as everyone knows, the center of the Jewish conspiracy to conquer the world, HBO’s Sex and the City didn’t feature a significant Jewish character until the show’s fifth season, when the blue-blooded, Connecticut-bred, straight-haired Charlotte York (Kristin Davis) divorces her equally WASPy surgeon husband, Trey MacDougal (Kyle MacLachlan). The divorce lawyer Charlotte employs? Harry Goldenblatt (Evan Handler), the bald, stocky, sweaty (Jewish) attorney she turns to only after his goyish partner in the law firm proves to be distractingly attractive, preventing Charlotte—who wants to appear ladylike in the eyes of a handsome man—from being as aggressive as she would like in pursuing her share of the marriage’s assets. Thankfully, there is nothing sexy about Harry, leaving Charlotte uninhibited enough to roll up the sleeves of her sweater set and come out swinging.

But Harry, of course, doesn’t see himself as the sexless creature that Charlotte does. Lured by shiksappeal, a phenomenon well-documented in popular culture, Harry falls for Charlotte, telling her once the case has settled that he is infatuated, a man stricken. He is mad about her, approaching her with a carnal gaze and a speech declaring his intense yearning for her, telling her that he has been unable to stop thinking about her since they met.

Why, hello, sex-crazed Jewish man desperate for an—ahem—outlet for his desires; I believe we’ve met before. (Spoiler alert: The next sentence contains an obligatory Philip Roth reference.) From Leopold Bloom to Alexander Portnoy, novels are filled with the sexual frustrations of Jewish males, men confounded and immobilized by their lust. Director Judd Apatow has built a career largely on the nervous fumblings of Jewish men—Jonah Hill, Seth Rogen, Jason Segel, all of them have shyly and awkwardly bumbled their way through Apatow’s films, shocked into near paralysis when the pretty (and not Jewish) girl lets them unhook her bra or come home with her.

And yet, Harry is not quite of their ilk. Because, you see, it turns out Harry is something of a sex savant. Though he schvitzes (his word) on Charlotte’s divorce papers, gets bits of tissue stuck to his damp, shining forehead and suffers from a general lack of suaveness, Harry manages to woo Charlotte with his open admiration of her, and then wow her with his sexual prowess. Initially rather repulsed by Harry’s poor etiquette, hirsute body and—oh, cruel fate!—hairless head, Charlotte is drawn to her ugly paramour for their unexpected chemistry. They begin what starts as a purely physical relationship and turns into a full-blown love affair, one in which Charlotte eventually converts to Judaism in order to marry the man who once disgusted her. (Though she gradually embraces Judaism, Charlotte is at first confused by its complexities; Harry’s willingness to order pork at a restaurant baffles her. “I’m not kosher, I’m Conservative,” he tells her. “I’m conservative, too,” Charlotte says, to which Harry responds, “My Conservative doesn’t have anything to do with wearing pearls.”)

Nebbishy, lawyerly Harry certainly seems to be cut from the same cloth as his anxious, uncool brethren. Harry knows that the “shiksa goddess” Charlotte seems to be beyond the reach of “a putz like me,” as he puts it. But while the stumbling nerds of the popular imagination typically win the affection of their crushes despite not knowing how to interact with members of the opposite sex, Harry gets the girl with his brazenness, a forthrightness that Charlotte finds difficult to resist. It’s his openness about his desire for her—coupled with a talent for coupling—that distinguishes Harry from his geeky cohort. Like the female characters of Apatow’s movies, Charlotte ultimately develops feelings of real depth for Harry, noting that if his warmth and kindness are part of his Jewishness, being Jewish might be something she would want for herself. But—unlike in Apatow’s films—these feelings emerge only after the ignition of a sexual spark.

Harry may have surprised audiences with his Casanova ways, but maybe he shouldn’t have. After all, in the show’s first season, Charlotte has a brief but passionate romance with Shmuel, a Hasidic artist in Williamsburg. The Jewish men of Sex and the City, it seems, have a power of seduction not found in the often self-conscious, insecure Jewish men of books, film and television. Must be something in the Cosmopolitans.