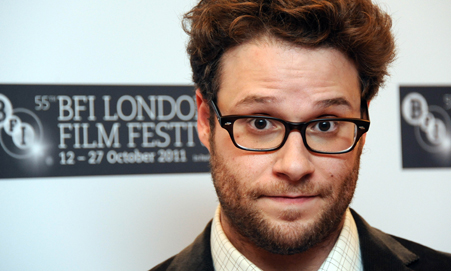 The new season of Arrested Development premieres on Sunday (all 15 episodes, at once, on Netflix), and suffice it to say, we’re excited. And we’re not the only ones—the New York Times is featuring daily interviews with the cast members, and the introduction to the interview with Jeffrey Tambor, who plays infamous patriarch George Bluth Sr., confirms that Jewcy favorite Seth Rogen will play a young George Sr. in the new season.

George Sr., you may recall, was a memorable installment of our Network Jews series—his conversion, while in prison, was as insincere and hilarious as all of his ventures. Here’s what Max Daniel had to say about Tambor’s bumbling character:

While the manipulations of those like Gob (Will Arnett) and Lucille (Jessica Walter) are often shallow and unintentional, George Sr.’s (Jeffrey Tambor) are the most successful, as he manages to manipulate every situation he finds himself in, even pitting his sons Gob and Michael (Jason Bateman) against one another for personal gain in a perverse rendering of the Jacob and Esau story. Sent to solitary confinement after an escape attempt from prison, George Sr. witnesses a sign from above—a shadow on the wall in the shape of a Star of David, complete with that schmaltzy clarinet music—and decides to become a Jew, crafting an improvised yarmulke out of his felt shoe (leaving an amusing tan line).

What this Judaism actually accomplishes is not much at all—he speaks slower and softer, he is exempt from the infamous “no touching” rule, but he’s still an unrepentant and self-interested liar (the producer, Mitchell Hurwitz, and several cast members are in fact MOTs—including Tambor, something he discussed with Marc Maron earlier this year.

So what’s in store for George Sr. this season? Tambor told the Times that his character is all about simply getting by:

Would you boo me if I said survival? That’s it. That’s what he mistakes for love and that’s how he operates his business. He likes to get it done. I’ve heard a lot of people bring up people in business and go, “Oh he’s this person.” I don’t know that there’s any of that intent, but he is of the times. The guy buried himself disguised as Saddam! I mean, come on!

(Photo by Stuart Wilson/Getty images For The BFI)

Replenish Your Cereal Supply: Season 2 of ‘Broad City’ is Coming