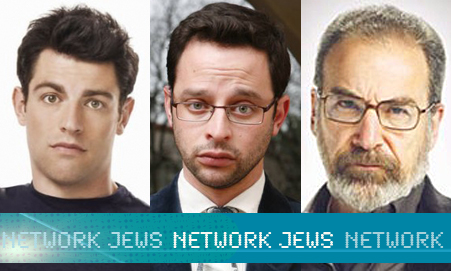 Rachel Berry moved to New York and we stopped watching, Annie Edison and the rest of Community was pushed to 2013 (though that didn’t stop us from getting our Alison Brie fill in other ways, and we’re still confused about how we feel about Shosh (but not Zosia, never Zosia) making 2012 very much the year of men for our Network Jews series (with sincere apologies to Hanna Rosin).

While there were many worthy candidates, here are the Top 5:

Our first Network Jew is also our favorite. While we remain mixed about the merits of New Girl (even if it did lead to this) we can always rely on the real star of the show: Schmidt. He may have started out as a douchebag, but somewhere along the line he’s become, as Willa Paskin dubbed him, an “aspirational douchebag”—somehow going from disgusting to endearing.

Of course a major part of all this is his Jewishness. But perhaps the best part is that the actor who plays him, Max Greenfield, is up for anything, whether it’s dressing up as a Jewish Assassin or making in-character spin videos. Let’s just hope he stops guest–editing GOOP.

Dov Friedman called Mandy Patinkin’s turn as the CIA Middle East division chief “the most accurate depiction of an American Jewish identity ever portrayed on television.” And for good reason. Homeland finished off it’s second season [spoiler alert] with Saul saying kaddish yet again as David Estes and a whole bunch of other characters were blown to smithereens. It isn’t just Claire Danes who thinks of challah (or was it holla?) when she sees our favorite bearded CIA agent. Just watch this video.

OK, we may be getting distracted, we’re talking about Berenson, not Patinkin, though it can be difficult to separate the two. Inspired by the Israeli show—and some would say superior—Hatufim, there’s at least one place where there’s no competition: the character of older, wiser intelligence officer. We only hope that in Season 3 they figure out some way to let him sing.

Probably the most underrated show on this list, Happy Endings’ six-person ensemble is held together by Max Blum. I know, I know. We just talked about how great Schmidt is, and here we’re saying that Happy Endings’ anti-Schmidt is also our favorite. You know what, we can have our cake and eat it too … with Max, while listening to Mandona.

The Good Wife may have started out as an Eliot Sptizer-style, ripped from the headlines, procedural-style show, and it might still be that, but somehow it rises above. While there’s lots to say about the shows women, and even Jewcy favorite Josh Charles, the biggest surprise has to be Alan Cumming’s Jewish turn as Eli Gold.

As Abe Fried-Tanzer wrote, “It’s no coincidence that Gold has been compared to a real-life famous Jew with a similar profession. Rahm Emanuel, former Chief of Staff for President Obama … has quite a reputation for winning at all costs, and Gold has managed to earn that same status in what could easily have been (and originally was) merely a guest-starring role. Gold may reinforce the stereotype of Jews wanting all the power, but he’s definitely someone you’d want on your side.”

There’s no getting around it: Nick Kroll’s Ruxin is a self-assured asshole. (In one episode, Ruxin defends a paint company whose cans explode by arguing that anyone buying such a cheap item should have “a reasonable expectation that that product will explode in your face.” “And, morally, you’re good with this?” asks his friend, Pete. “There was just one word in there that I am not familiar with,” Ruxin responds.) But, for Sala Levin, this is all the more reason to love him—and love him we do!

After all, “A man who coasts through life on his assimilated rudeness but maintains some iota of his people’s historical dread is, after all, every girl’s dream.”