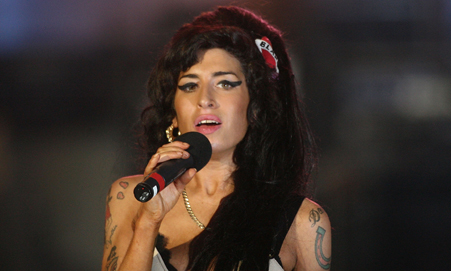 A documentary based on the life and death of the late, great rebellious soul singer Amy Winehouse is sitting in the film incubator. Asif Kapadia, the award-winning director of Senna, will reportedly weave never-before-seen archival footage into his narrative of Winehouse’s musical ascent and tragic decline.

The Wino doc has yet to be titled, because it has yet to be sold—international buyers will bid at the Cannes Film Festival in May. According to the New York Times‘ ArtsBeat blog, the Winehouse family said that although they had been approached many times by filmmakers interested in telling Amy’s story, they believed Kapadia and the film’s producer, Gay-Rees, would “look at Amy’s story sensitively, honestly and without sensationalizing her.”

Winehouse, a London-born Jew, was found dead at her home from alcohol poisoning in July 2011 at the age of 27. No doubt the singer’s fans will be waiting with bated breath for a glimpse at the new footage—hopefully the film will bring with it some unreleased Winehouse tracks too.

In other Winehouse news, Beyonce recorded a version of the late artist’s hit song, “Back to Black” for the upcoming blockbuster film, The Great Gatsby, which Winehouse’s father, Mitch, was reportedly not happy about. “I don’t think she brings anything to it,” he told the British press, adding, “I wasn’t asked for my permission if they could record it.”

He has since agreed to its use in the film, but only if the studio pays up: “They have got to pay for the privilege, which is what they are doing. I can’t tell you how much it is but it’s a lot of money.”