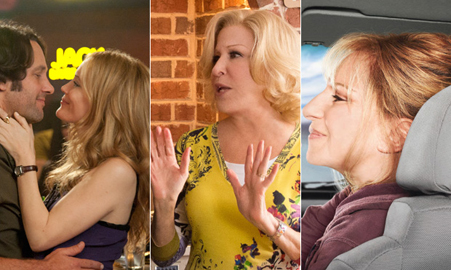 Just as much as Chinese food on Christmas Day is a veritable Jewish tradition, so to is the movie you inevitably head to afterwards. This year, will you be seeing Judd Apatow’s latest man-child flick This is 40, or will it be the Barbra Streisand/Seth Rogen buddy comedy The Guilt Trip? You could always ditch both of those and go see Billy Crystal and Bette Midler as the ‘other’ grandparents in Parental Guidance—either way, your movie options are pretty damn Jewish this year.

Tablet’s movie critic J. Hoberman has some thoughts about the three films, all more Jewish than Chinese food on Christmas. Unfortunately, however, his diagnosis isn’t pretty:

But just what is a comedy? Their nominal happy endings notwithstanding, all three movies reek of male failure. Perhaps because they are played by beloved icons Streisand and Midler, the Jewish mothers in The Guilt Trip and Parental Guidance are wacky and endearing. What’s more, however annoying the advice, their wisdom is essentially right; the best that could be said for the Jewish men is oy vey. The Jewish father in This Is 40 (Paul Rudd) is in danger of going broke and having to sell his house, in part because he is helping to supporthis supremely feckless father (Albert Brooks); the Job-like Jewish son (Rogen) in The Guilt Trip can’t keep a girlfriend or successfully market his idea for a “green” household cleanser; the Jewish grandfather in Parental Guidance (Crystal) has lost his job and possibly his mind. Not a “Hebrew Hammer” among them.