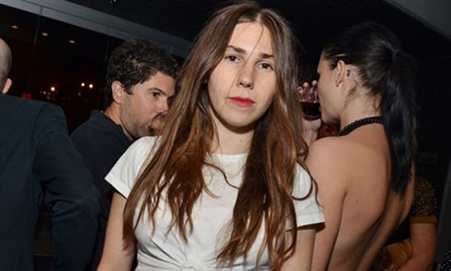 Taffy Brodesser-Akner talked to 24-year-old actress Zosia Mamet, who these days is always getting recognized for—and sometimes even confused as—her breakout role as the earnestly naive Shoshanna Shapiro on Lena Dunham’s HBO hit Girls. But she’s quick to point out that she’s no Shoshanna.

The most noticeable difference between the insecure Shoshanna and the self-assured, articulate Mamet, who’s trying her hand at theater next, is confidence. Mamet, who “says ‘like’ a lot and curses plenty” almost seems like the anti-Shosh (except for the ‘like’ habit), aware of exactly why her show has become the cultural sensation it has but maintaining that she, unlike her character, isn’t lost:

Here’s what else David’s daughter had to say:

On her grungy Girls audition: “I did my tape in one of my father’s oversize sweaters and no makeup and dirty hair,” she says.

On her casual WASP-dom: “The only WASPy part of me is that I like gin,” she says. “Oh, and I ride horses.”

On being really awesome: “if I were not an actress, I would be a pirate.”

Catch Mamet in all her Shoshanna glory when Girls Season 2 premieres January 13.

Zosia Mamet Is Still Getting Used to Being Your New Best Friend [NYT] Previously: ‘Girls’ Scene-Stealer Zosia Mamet Follows Dad, Makes Off Broadway Debut
How Do You Solve a Problem Like Shoshanna?