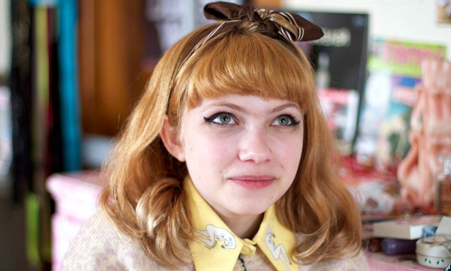 The unstoppable Tavi Gevinson dropped by The Colbert Report last night, wearing an extremely festive sweater for the occasion. The 16-year-old Rookie editor talked about her high school English class (she hasn’t read the assigned Robert Frost poems yet, oops) and the mysterious world of teenage girls.

Colbert suggests he write a column for Rookie called ‘You’re Not Wearing That’ (which would actually be hilarious), and then Gevinson offers the 48-year-old dad some One Direction-themed fashion advice. The best part is when she explains that his show is a ‘cool dad show,’ and that she watched it last night with her very own cool dad.

He doesn’t really understand, so she breaks it down for him: “Other Capital C Capital D ‘Cool Dads’ like your cool dad show.” She rules.