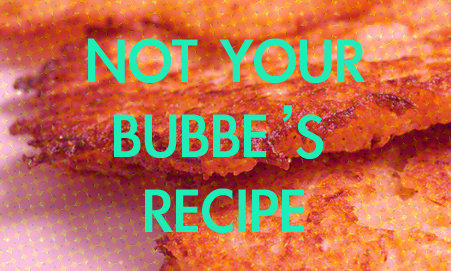 Like all good Jewish holidays, Hanukkah is deeply connected to its edible customs: the latke. History books (or the book of Macabees) will tell you that Hanukkah is all about commemorating the Hashmonaim’s successful rebellion, but the miracle everyone is eager to talk about is that a single days supply of oil was used to light the Menorah for eight days. In commemoration and celebration, every year since, we light menorahs in our own homes, and eat foods fried in oil, like latkes.

The term latke comes from Yiddish. (In Israel, these potato pancakes are referred to strictly as levivot.) Phyllis Glazer explains that latkes became popular in Eastern Europe because of the lack of options. One thing commonly found in Poland, Russia, and the many Eastern European countries where Jews lived, were potatoes. Jewish mothers were always Jewish mothers, so they were concerned about putting meat on their kids’ bones and were constantly inventing new potato recipes. Virgin olive oil was rare in the shtetls, so the original latkes were fried in chicken fat. Back then, much like today, kids listened greedily as the grated potatoes received their seer while their mothers warned them of the dangers of burning their tongues.

Despite the fact that the miracles of Hanukkah took place in Israel, there is something very American about sitting around the table and celebrating with deep fried foods. Growing up in a suburban community, with lawns lit with plastic reindeer and cheerful Santas, it was hard not to compare my winter holiday Christmas. Eight days vs. one morning of presents helped me feel like I came out ahead. Of course as Lemony Snicket points out in this quote from his classic Hanukkah novel, The Latke Who Couldn’t Stop Screaming, the essence of Hanukkah can be summed up in a single bite of latke:

The latke sighed. “Presents aren’t really a big part of Hanukkah,” it said in a voice hoarse from screaming. “There’s nothing wrong with giving gifts to loved ones, of course, but it’s more important to light the candles for eight consecutive nights, to commemorate the miracle in the Temple and the miracle of victory even when you are thoroughly outnumbered, so you shouldn’t give up hope.

Crunchy on the outside, soft on the inside, and delicious on every side, the potato latke reminds us that the miracle of Hanukkah is about fighting for what’s right (and our heritage) with every greasy bite. And there is nothing more Jewish then celebrating something by eating a big meal with your family. But, while the latke is both symbolic and scrumptious (especially this one), eight days of anything can get tiresome. Everything in this universe is better when deep fried, but a simple potato can taste too simple after eating it fried time and time again. While the latke is a crowd pleaser, it’s not something you’d ideally serve to a dinner party sort of crowd. I got you covered.

With a few simple steps, these Indian-spiced latkes give the classic recipe a more modern and global spin. By throwing in some toasted spices, you make this dish seem more complex than the one most people are used to. but just as easy to make. Like most Indian recipes, these latkes have a nice little kick, but it’s contained so that the Ashkenazim among us can enjoy them too.

The apple chutney is optional, but not if you love your taste buds. It’s meant to replace the jar of applesauce most people plop on their Hanukkah table, and give it a classier and more exciting twist.

1. First, make your apple chutney by heating your peanut oil over medium heat in a medium sized pot.

2. Once your oil is hot, sauté your shallot until it becomes translucent, around 7 minutes.

3. Add your sugar, and stir it until it dissolves.

4. Raise the heat under the pot to medium high and pour in the rest of ingredients aside from the apples.

5. Allow your chutney to simmer for about 15 minutes, until it receives a syrupy consistency, and less than one-half of the liquid remains. Then add the apples to the pot and stir.

6. Cook the apples in the chutney for about 15 minutes, until they are soft but not mushy.

7. When the chutney is done cooking, pour it into a glass jar. Once it reaches room temperature put it in the refrigerator to thicken.

8. Start making your latkes by toasting your spices. Place all of your spices in a small sauce pan over a medium heat. Allow your spices to toast until they become fragrant, about five minutes.

9. Using either a grater or a food processer, grate your potatoes and then place them in a large strainer. Try to press as much liquid out of the potatoes as possible in order to prevent your latkes from being soggy or falling apart.

10. Once you have removed the liquid out of the grated potatoes, place them in a large glass bowl. Add the scallions and toss together.

12. Mix the vegetables with your matza meal, spices, and eggs until they are combined but not clumpy.

13. Once your oil is hot, you are ready to fry latkes: Place about 2 tbsps of your latke mix in the palm of your hand—clamp your hand around the mix in order to make it a solid ball—and flatten it so that it is flat like a pancake. Place your latkes in the frying pan.

14. Fry for a few minutes on each side. You can fry them until they look done to you, according to your preference.

**Some people like their latkes burnt, others like them nearly raw, effecting the cooking time. Keep in mind the hotter the oil the more likely the outside will get very cooked and the inside not so much, so you may want to add oil in between batches.

15. While you wait for your latkes to fry, cover a baking dish with paper towels. When your latkes are done, place them there to remove the excess oil.

16. Serve immediately with the apple chutney.

Not Your Bubbe’s Southern Chili Cholent

Not Your Bubbe’s Thanksgiving Turkey

Not Your Bubbe’s Stuffed Cabbage Kugel