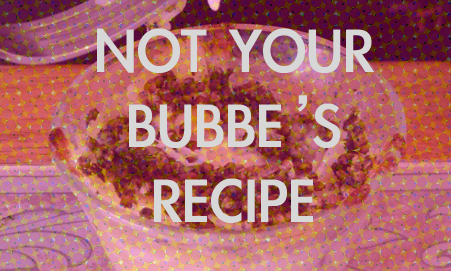 You never know when it’ll happen, and when it does you never know how to react. You’ll be innocently sitting at a table, minding your own business, when someone hands you a bowl of death.

Excuse me, I mean a bowl of kasha varnishkas.

I’m sorry, but I really can’t be polite about this. Kasha varnishkas are grey like death, taste like death, and getting the bits of it out of your teeth kills your afternoon. I’ve never heard someone say ‘mmm hand me that kasha varnishkas,’ or ‘I know what would make this meal better, kasha varnishkas.’ To be completely honest I’m not quiet sure why this is a classic Jewish dish. But it is.

Every Thanksgiving, my grandmother’s festive lunch meant the one time a year my family was invited to her house and she served food. If you were wondering, by serving food I mean she called up the local kosher deli and had them set up the works. By the time we arrived, I was always starving. After dodging some hugs and kisses, I wanted to do what all good Americans do: dig in and eat. Being that we were the only people in our extended family that kept kosher, everyone was handed their own plate made out of the flimsiest paper known to mankind and directed to the table covered in takeout boxes. Part of growing up is getting covered in physical and emotional scars. The memory of desperately chewing kasha varnishkas with the same happy expression a cat has as it nibbles on its hairball makes me realize those Thanksgiving lunches provided me with both. Ultimately my difficult upbringing and the challenges of digesting reheated kosher deli takeout made me want to make a kid-friendly version of kasha varnishkas that I’d happily eat today as an overgrown child.

Arthur Schwartz, a former instructor at the Culinary Institute of America and the author of countless food-related books, says that kasha means cereal in Russian and varnishkas’ root is the Ukrainian word for a filled dumpling. Perhaps this got lost in translation and somewhere along the lines the ancestors of Jewish cuisine turned it into the traditional dish found in kosher deli’s to this very day: kasha, or buckwheat groats, and varnishkas, or bowtie pastas. If this doesn’t sound appetizing enough, proper kasha varnishkas is made with chicken fat. That’s right the fat of a chicken. Nothing says yummy in my tummy quiet like chicken lard.

I guess you could say I didn’t decide that this recipe needs to be rebooted, the universe did.

That was clearly the first thing to go, and it was replaced by sticky heart-stopping cheddar cheese, making it much more colorful than its black-and-white predecessor. This dish, which can be found all over the Jewish culinary scene, gets a lot of its flavor from an onion—that’s why in this version we use both red and white ones. In order to give this recipe a bit of a bite, and in hopes of making macaroni and cheese good for your body as well as your soul, I added some peppers.

Anyone who has tasted the classic version of this dish knows how strong of a taste the kasha has. It more or less flavors everything and leaves a little nasty something in between your teeth, which makes you taste the kasha varnishkas long after you’ve finished chewing. In order to make the strong taste a bit friendlier I sprinkled it on top of the dish with fresh coriander and garlic—with this kasha, you’ll be glad to be tasting it long after you’re done.

Not Your Bubbe’s Kasha Varnishka
Serves 6-8

1. Preheat your oven to 400 degrees and boil a medium pot of water.

2. Melt your butter in a large pot over a medium heat.

3. Once your butter starts to melt add the onion and salt and pepper to taste. Let them cook until it begins to soften.

4. Slowly add your flour to the pot and mix until the contents thicken.

5. Gradually, about 1\4 of a cup at a time, add the milk. Before each addition let the sauce thicken considerably and whisk constantly.

6. Once you have added all the milk, let your sauce simmer over a medium heat for 7 minutes.

7. Add the rest of your vegetables, and let the sauce simmer for another 3-5 minutes.

8. While the sauce is thickening, cook your pasta in the boiling water. Cook it 90 percent of the way you normally would because it will continue cooking in the sauce and in the oven. (If you’re not sure how long to cook it for, read the pasta’s package. There should be a suggested amount of cooking time. Let your pasta cook for a few minutes less than they suggest.)

9. As you wait for everything to cook, combine your kasha, cilantro, and garlic cloves in a small bowl. Set aside until later.

10. Once the sauce has thickened, gradually add the cheese and let each addition melt before adding any more cheese.

11. After adding all your cheese, toss your pasta into the sauce and stir it around in the pot.

12. Spray a large baking dish and pour your pasta and sauce inside.

13. Sprinkle the top of the pasta and cheese with its kasha crust.