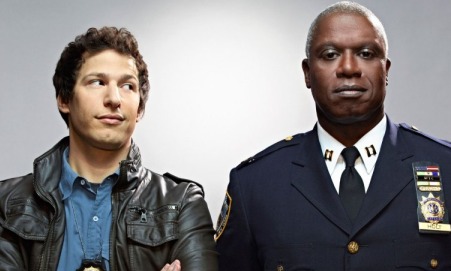 How can you tell if a television show is good? Well, you can just ask yourself, did I like that? But sometimes that feels wrong because sometimes you enjoy things that you consider trashy, and sometimes you don’t enjoy things that are, on some level, considered “good”. So, I’ve created a metric for how to judge a show by breaking it down to its components. After our lesson, we’ll judge the new Fox show starring Andy Samberg, Brooklyn Nine-Nine.

Aesthetic judgments are a composite of three things: the intelligence of the object in question, its emotional quality, and what I like to call the sensibilities the object in question promotes—its core values as they are exposed by certain plot lines and aesthetic choices. These three aspects of any work of art can be broken down in order to get at some of the ways the work affects us, or fails to. It’s a helpful metric for analyzing one’s own ambivalent feelings about encounters of the third (in the Kantian sense) kind.

Let’s start with intelligence. There are three essential levels of intelligence that television shows are aimed at. A show pitched at the first level is that show that comes on in the mornings while you’re in the waiting room at your doctor’s office. The host stands in front of the participant who is for some reason dressed as a pirate and bellows at his or her face: “Here is a FIVE HUNDRED DOLLAR BILL! Do you want this five hundred dollar bill, or WHATEVER SECRET THING IS HIDDEN IN THAT BLACK BOX?” The participant presumably makes the choice and either satisfaction or dissatisfaction ensues. While the emotions of the show are quite compelling—that stupefaction that comes with high stakes choices absent the information necessary to make them—the show insults our intelligence, for it has no constraints associated with the task demanded of the participant.

The second level of intelligence can be found at shows aiming to intrigue their viewers, yet failing because once intrigued, they overplay their hand. In this category we have the show that is excellent with set up, but insults us by telling us what we have already learned via hints and clues that the show has assiduously planted. These shows always cause a spectator to say, “Wait. You mean he must have killed his victim before 6 p.m., because the clock with the gunshot is stuck at 6 p.m.?” In this category you have your Law and Order, your Aaron Sorkin, and any show with a laugh track except for Will and Grace. Sorkin’s mistake is that he thinks he has one up on the viewer. He doesn’t. It’s embarrassing.

The third level of intelligence occurs in shows whose producers are not only intelligent but who believe in the intellectual capacity of their viewers. They treat their audience as if they can be trusted with basic functions of inference. For example, in these shows, sometimes the producers will purposely withhold information from their audience, and they trust that the audience can read it is as such. In this category, you have your Good Wife, your Breaking Bad.

But these shows can fail in other ways. Take Breaking Bad. Intellectually, I am not insulted. The creators and actors clearly expect me to keep up, which I appreciate. But I am insulted emotionally by the show, which expects me to be carried along by the paltry emotional palette of a man who wants power. Furthermore, the show’s sensibilities offend: it has a serious race problem. It is essentially a show about the family as a corporation, the corporation as a family. The whole concept of the perfect product winning the day when applied to drugs—to meth—well, it offends the sensibilities, more than the intellect, insofar as it betrays a dishonorable bias the show has toward conservative values.

Some shows succeed intellectually, but fail emotionally, like 30 Rock. “But it’s not supposed to do anything emotionally!” you might argue. Untrue. It’s full of emotions—they just don’t reach me. And some shows can succeed with their sensibilities, but fail in the other departments. Shonda Rhimes has sensibilities I can really get behind, like, women who are really good at their jobs! Who put men in their place! Who own bad-assery! But when that amazing woman shouts for the nth time, “I need you to do your job because I do my job and I’m really good at it! Because everything can be fixed!” I then become a little intellectually insulted because I remember that speech from the first thirteen episodes; I don’t need a reminder.

And some shows are perfect. Friday Night Lights. Top of the Lake. Buffy the Vampire Slayer. Veep. Green Wing. Sigh.

Now that we’ve mastered our metric— intelligence, emotions, sensibilities— lets take a closer look at Andy Samberg’s new show, Brooklyn Nine-Nine. Do you know if you like this show? Allow me to assist you in breaking it down. Brooklyn Nine-Nine features Samberg as Detective Jake Peralta. Samberg is the brilliant detective who gets away with all his antics because he is so good at detecting. Samberg has the funniest lines. Samberg is often surrounded by gorgeous women, who gaze up at him, waiting for his next funny line. Samberg wins every match, everyone’s good will. It’s like a fantasy of the man-child life, but it’s portrayed as a reality. Peralta gets away with being irresponsible and idiotic, and he’s loved regardless. And for this reason, it’s insulting. It asks us to accept this fantasy as an objective. To think that we wouldn’t notice—this is second tier intellectual stuff. To idealize the man-child—this insults our sensibilities. The way it plays with the beta-males in Peralta’s vicinity—-this insults us emotionally. The verdict? This show is bad.