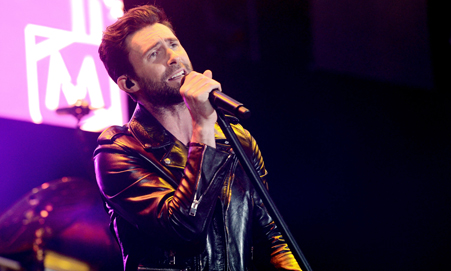 You were probably sad when Maroon 5 frontman Adam Levine proposed to Victoria’s Secret model Behati Prinsloo. One of those nonsensical depressions. Like, you probably would never have actually met and married Levine yourself, but you wanted the option. Anyway, there’s a new, more practical way to be close to him: wear his clothes. Levine’s “222” line is doing really, really well at Kmart, the Daily Mail UK reports:

The 34-year-old launched a collection of men’s clothing and accessories for Kmart on October 1, and according to Kmart boss Bernt Ullmann, it’s doing incredibly well.

So well, in fact, that Mr Ullmann thinks the singer is destined for great things in the fashion world. He told WWD: ‘We couldn’t be happier. . . There is nothing on the floor that is not working,’ adding: ‘I think Adam has the ability to be Kmart’s Calvin Klein business.’

That’s right. Kmart’s Calvin Klein. With such high praise you must be wondering: What about the ladies? Glad you asked. Come springtime, you can show off your legs in Levine’s new line for ladies. His wife will even help him get that feminine look right.

The womens’ clothing will undoubtedly be a hit among Mr Levine’s mostly female fanbase, and it will also be helped by Miss Prinsloo, who is expected to ‘have a voice in the development’.

We know. YOU wanted to help Levine design the clothes, but you can’t, remember? Maybe you can help Joseph Gordon-Levitt design his future clothing line. Oh, wait. He’s taken, too. Sigh. I guess we’ll just wear the clothes and move on.