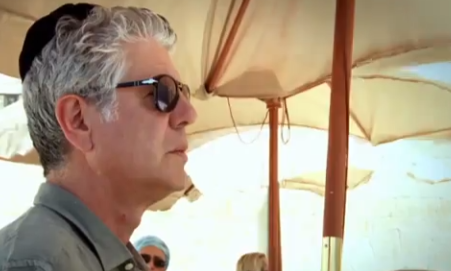 In the season premier of Anthony Bourdain’s Parts Unknown on CNN, the culinary connoisseur finally traveled to Jerusalem, but what made the episode even more noteworthy was when Bourdain disclosed his Jewish heritage, JTA reports. While putting on tefillin, Bourdain explained that one of his parents was Catholic and the other was Jewish.

“I’ve never been in a synagogue. I don’t believe in a higher power,” the celebrity chef said. “But that doesn’t make me any less Jewish, I don’t think.”

Not any less Jewish at all. He does love Brooklyn’s corned beef and pastrami— it all makes sense.