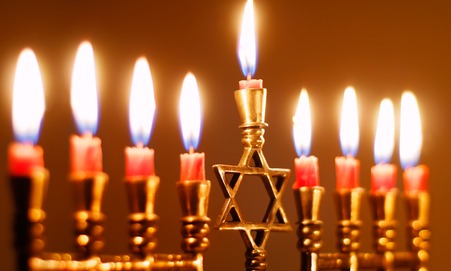 Last night, on Jezebel’s open forum ‘Groupthink,’ there was a peculiar little list called “Holidays Worse Than Halloween.” The list had in it six holidays, most of them secular and patriotic: the Fourth of July, Mother’s Day, Veteran’s Day, Arbor Day, and Columbus Day. Like Halloween, these holidays are celebrated by the general public. But unlike Halloween, the first holiday on the list was Hanukkah, a holiday celebrated just by the Jews.

The author, UBERSEXYROBOTPIRATENINJATROUT (probably not a birth name), explained the disdain for the Jewish festival of lights.

Hanukah — aka The Worst Holiday Ever, aka An Infinitely Shittier Version of Christmas. There is nothing good about this holiday. NOTHING. It’s like someone took Christmas and decided to remove every single good thing about it. I will hate Hanukah until the end of my days. I would literally rather shoot myself in the testicles than force my children to have Hanukah but no Christmas (yes, I am still bitter about this, and I always will be).

Really, you’d rather shoot yourself in the testicles? When you were growing up, if you were forced to celebrate Hanukkah over Christmas, I’m sorry that was so hard on you. I get it. Because in the war of Christmas v. Hanukkah, Christmas always wins. Christmas is everywhere. It’s the music on the radio, it’s the decorations in Duane Reade. It’s the moral in the movies and it’s a bully’s punchline to the sole kid in the class who celebrates Hanukkah, not Christmas. Because of timing, Hanukkah will inevitably be compared to Christmas, and though you may hate it, UBERSEXYROBOTPIRATENINJATROUT, a lot of us love it, despite having had to endure Hanukkah bashing our whole lives.

Growing up, Hanukkah was my favorite holiday. Despite its lengthiness, the eight days always lacked the pressure of the High Holidays. It was easier on my mother—no guests, no big meals, just our family of five. We’d light the candles on the artful menorahs that my mother collected. We’d eat latkes; sometimes I’d eat mine with powdered sugar and other times with applesauce. We’d eat sufganiyot, but my brothers and I would pick around the jelly filling, eating just the doughy parts, because we were Florida’s Fussiest Eaters. We’d play dreidel and my father would show off his ever-cool ability to spit it on its top. There were no Hanukkah bushes and there were no blue are white twinkle lights. Just us in our living room, each night, after we lit the candles.

Jezebel’s Groupthink is said to be a place for accessible discourse.

Groupthink is a forum for everyone. That is not to say that ‘everyone’ will get author access or that ‘everyone’ will be a non-gray on the forum. However, it does mean that this is a general purpose space and, accordingly, our aim is to make this a welcoming forum that people feel comfortable interacting with each other in.

But bashing a holiday that any religion celebrates weakens that discourse and turns the discussion into an unsafe place. A place where Hanukkah is bad because Christmas is good. I’m sort of grown up now, so Hanukkah slurs won’t hurt me. But for the people still coming of age, you might want to keep your opinions to yourself. Loving Hanukkah should be easy.