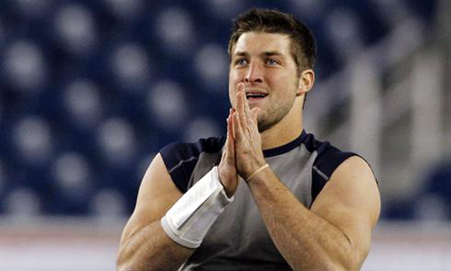 First the Jets, then…the Jews? Meet the Jews for Tebow, fans of the outspoken evangelical Christian football player who follow his career, well, religiously. The group has nearly 4,000 ‘likes‘ on Facebook.

Metro spoke to the group’s founder, Ike Thaler, who said this:

With time, I have found that other Jews shared the same support for Tebow. More of our supporters and members seem to concentrate on the football aspect of his career more than the religious aspect. We do have our share of religiously conservative fans, but the majority simply love the fact that he is a positive role model and an exciting football player that tends to beat the odds and win.