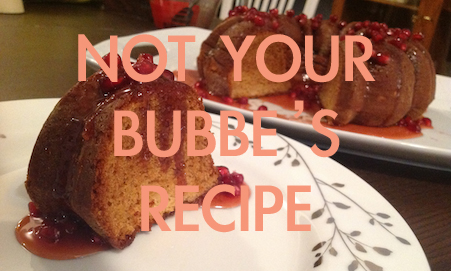 For many families, eating honey cake is a Rosh Hashanah staple, but in my family it wasn’t eaten so much as ignored. I never cared for this particular baked good. I find it heavy and cloyingly sweet. It was a cake I associated with grandparents and shul kiddush leftovers—always left untouched as the crowd thinned and people headed home for lunch. But wherever I went on Rosh Hashanah, people would insist on making and serving this cake because its star ingredient, its namesake, is practically the symbol for Rosh Hashanah. After all, how can you say “l’shana tovah u mitukah”—“to a good and sweet new year”—without honey?

The honey cake originated in Germany around 1320 and was called lekach, coming from the German word for “lick.” Honey was often used as a treat to encourage and entice young yeshiva students in their studies. Early Ashkenazi Jews even made a ceremony out of it with the Aleph-Bazyn: honey was spread on slates containing the Hebrew alphabet and as the young students licked off the honey, the idea was that they were reminded of the sweetness the Torah held. At the end of the ceremony, honey cakes along with other sweets were distributed.

Before the days of refrigeration and plastic cake-savers, honey was also an extremely popular ingredient in cooking and baking because it acted as a preservative and was supposed to ensure a moist cake. Unfortunately, this aspect of the cake—the densely sweet cake that seems to last forever—is not so enticing. To compensate for that, I’ve come up with a version that lightens things up by incorporating the traditional flavor of the honey cake into a chiffon cake, which is leavened by both chemical leaveners and beaten egg whites. The result is a moist, yet light, cake.

To heighten the taste, I paired the cake with a pomegranate glaze, which offers a tangy and fruity counterpoint to the sweetness. Pomegranates are also a traditional Rosh Hashana food because their many seeds are said to number 613, the same as the number of mitzvot found in the Torah. Many people eat them in order to usher in a year filled with good deeds—I eat them because of their deliciously tart seeds that burst with flavor. Sprinkling fresh seeds on top of the glazed cake adds a wonderful texture as well as flavor to the cake.

Unlike its earlier iterations, this honey cake—with its light texture, ruby red glaze, and crunchy pomegranate topping—shouldn’t be ignored. If nothing else, it will help usher in a year filled with scrumptious cakes and tastier shul kiddushes.

Not Your Bubbe’s Honey Cake
8-10 Servings

1. Pre-heat the oven to 350 degrees and grease the pan well.

2. To make the cake, combine the flour, baking powder, baking soda, and salt.

3. In a separate bowl, combine the egg yolks and both sugars, mixing well.

4. Add the oil, honey, tea, and lemon zest to the egg yolk mixture.

5. Combine the honey mixture with the flour mixture and set aside.

6. In another bowl, beat the egg whites until they form stiff peaks, being careful not to over beat them.

8. Pour into the prepared pan and put directly into the oven and bake for 40-45 minutes, or until the cake springs back when you touch it.

9. Let cool for 10 minutes, then invert the pan onto a cooling rack and let the cake finish cooling off inverted in the pan. When completely cool, carefully lift the pan to unmold. If you have any difficulty, run a thin knife around the edges of the pan to help the cake out.

10. While the cake is in the oven, make the Pomegranate Glaze. To make the syrup, combine the pomegranate juice sugar, orange juice, and cornstarch in a sauce pot.

11. Bring to a boil then reduce the heat and allow the mixture to simmer. Cook the mixture for about 20 minutes, until it thickens and reduces by half. If necessary, strain the mixture and then allow it to cool.

12. When both the cake and glaze are cool, pour the glaze over the cake and then sprinkle the fresh pomegranate seeds on top.

Not Your Bubbe’s Deconstructed Baba Ghanoush