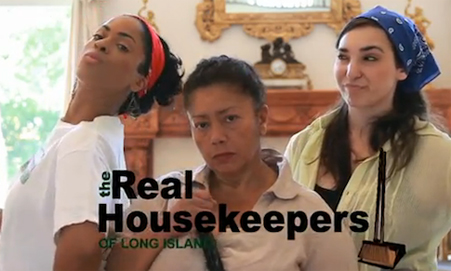 “You’ve watched the fights, seen the drama…but who’s gonna clean up the mess?” a Bravo-esque voiceover teases. The Real Housekeepers of Long Island, that’s who—at least according to this (at times NSFW) parody video from the guys behind the YouTube video Nassau (County) State of Mind.

Mocking the Real Housewives series on Bravo, which seems to be reproducing endlessly in new locations, the video turns the cameras…onto the maids. An obnoxious Long Island woman demands Xanax and accuses Olga of stealing her jewelry, while her husband demands to know who made a $200 phone call to El Salvador. It’s absurd and over-the-top, just like the shows it skewers.

Tyler Gildin, one of the video’s creators, said they put out casting calls and hired actors and actresses for the one-day shoot—a step up from last year’s music video tribute to the unparalleled opulence of Long Island’s Nassau County, which featured Gildin, Evan Krumholz, and Keith Gould rapping in front of sports cars.

“With YouTube, there are so many opportunities to put yourself out there now,” Gildin, an aspiring comedian, explained. It’s hard not to believe that, coming from the guy who stars in the video’s toilet-clogging scene.

Would you tune in for the Real Housekeepers of Long Island?

Chicken Fingers, Fries, and A Coke